Fallingwater is a house designed by American architect Frank Lloyd Wright in 1935 in rural southwestern Pennsylvania, 50 miles southeast of Pittsburgh.

The home was built partly over a waterfall on Bear Run in the Mill Run section of Stewart Township, Fayette County, Pennsylvania, in the Laurel Highlands of the Allegheny Mountains.
Hailed by Time shortly after its completion as Wright's "most beautiful job", it is also listed among Smithsonian's Life List of 28 places "to visit before you die." Fallingwater was featured in Bob Vila's A&E Network production Guide to Historic Homes of America. It was designated a National Historic Landmark in 1966. In 1991, members of the American Institute of Architects named the house the "best all-time work of American architecture" and in 2007, it was ranked twenty-ninth on the list of America's Favorite Architecture according to the AIA.

The structural design for Fallingwater was undertaken by Wright in association with staff engineers Mendel Glickman and William Wesley Peters, who had been responsible for the columns featured in Wright’s revolutionary design for the Johnson Wax Headquarters.

Preliminary plans were issued to Kaufmann for approval on October 15, 1935, after which Wright made a further visit to the site and provided a cost estimate for the job. In December 1935 an old rock quarry was reopened to the west of the site to provide the stones needed for the house’s walls. Wright only made periodic visits during construction, instead assigning his apprentice Robert Mosher as his permanent on-site representative. The final working drawings were issued by Wright in March 1936 with work beginning on the bridge and main house in April 1936.

The strong horizontal and vertical lines are a distinctive feature of Fallingwater
The construction was plagued by conflicts between Wright, Kaufmann, and the construction contractor. Uncomfortable with what he perceived as Wright's insufficient experience using reinforced concrete Kaufmann had the artictect's daring cantilever design reviewed by a firm of consulting engineers. Upon receiving their report Wright took offense and immediately requested Kaufmann to return his drawings and indicated he was withdrawing from the project. Kaufmann relented to Wright's gambit and the engineer’s report was subsequently buried within a stone wall of the house.
After a visit to the sitein June 1936 Wright rejected the concrete work for the bridge, which had to be rebuilt.

For the cantilevered floors Wright and his team used upside down T-shaped beams integrated into a monolithic concrete slab which both formed the ceiling of the space below and provided resistance against compression. The contractor, Walter Hall, also an engineer, produced independent computations and argued for increasing the reinforcing steel in the first floor’s slab. Wright rebuffed the contractor. While some sources state that it was the contractor who quietly doubled the amount of reinforcement, according to others, it was at Kaufmann’s request that his consulting engineers redrew Wright’s reinforcing drawings and doubled the amount of steel specified by Wright. This additional steel not only added weight to the slab but was set so close together that the concrete often could not properly fill in between the steel, which weakened the slab.[citation needed] In addition, the contractor did not build in a slight upward incline in the formwork for the cantilever to compensate for the settling and deflection of the cantilever once the concrete formwork was removed. As a result, the cantilever developed a noticeable sag. Upon learning of this, Wright temporarily replaced Mosher with Edgar Tafel.

With Kaufmann’s approval the consulting engineers arranged for the contractor to install a supporting wall under the main supporting beam for the west terrace. When Wright discovered it on a site visit he had Mosher discreetly remove the top course of stones. When Kaufmann later confessed to what had been done, Wright showed him what Mosher had done and pointed out that the cantilever had held up for the past month under test loads without the wall’s support.

In October 1937 the main house was completed.

Fallingwater stands as one of Wright's greatest masterpieces both for its dynamism and for its integration with the striking natural surroundings. Wright's passion for Japanese architecture was strongly reflected in the design of Fallingwater, particularly in the importance of interpenetrating exterior and interior spaces and the strong emphasis placed on harmony between man and nature. Tadao Ando once stated: "I think Wright learned the most important aspect of architecture, the treatment of space, from Japanese architecture. When I visited Fallingwater in Pennsylvania, I found that same sensibility of space. But there was the additional sounds of nature that appealed to me."

The extent of Wright's genius in integrating every detail of his design can only be hinted at in photographs. This organically designed private residence was intended to be a nature retreat for its owners. The house is well-known for its connection to the site: it is built on top of an active waterfall which flows beneath the house. The fireplace hearth in the living room integrates boulders found on the site and upon which the house was built — ledge rock which protrudes slightly through the living room floor was left in place to demonstrably link the outside with the in. Wright had initially intended that the ledge be cut flush with the floor, but this had been one of the Kaufmann family's favorite sunning spots, so Mr. Kaufmann insisted that it be left as it was. The stone floors are waxed, while the hearth is left plain, giving the impression of dry rocks protruding from a stream.

Integration with the setting extends even to small details. For example, where glass meets stone walls there is no metal frame; rather, the glass is caulked directly to the stone. There are stairways directly down to the water. And in a connecting space which transitions from the main house to the guest and servant level a natural spring drips water inside, which is then channeled back out. Bedrooms are small, some with low ceilings to encourage people outward toward the open social areas, decks, and outdoors.

Fallingwater, a private residence improbably suspended over a waterfall, is about a two-hour drive northwest from Pittsburg, Pennsylvania, halfway between the villages of Mill Run and Ohiopyle on PA Route 381. It is a masterwork of Frank Lloyd Wright, one of America's most important architects.

The history of Fallingwater began in 1936, when Pittsburgh department store owner Edgar J. Kaufmann hired Wright to design a weekend retreat for his family, on land in Mill Run. Incorporating much of what was already on the site, including rocks, trees, and a rushing creek, the house was set amid 5,000 acres of natural wilderness that juts out over a waterfall on Bear Run.

The building was constructed of sandstone, reinforced concrete, steel and glass, and built by local craftsmen. The stone serves to separate reinforced concrete trays, forming living and bedroom levels dramatically cantilevered over the waterfall. The house extends 30 feet in height above the rock ledges, although strong horizontal lines and low ceilings help to maintain an overall sheltered feeling. The guest and service wing were completed in 1939. The unique attraction of the house is the waterfall over which it is built.

Fallingwater remained the weekend home of the Kaufmann family from 1937 to 1963, when the house, its contents and grounds were donated to the Western Pennsylvania Conservancy by Edgar Kaufmann Jr. Fallingwater is the sole remaining Wright house with its setting, original furnishings, and artwork intact.

The masterpiece was opened to the public in 1964. The visitors pavilion contains the exhibits on Fallingwater, a child care center, a café, an interpretive nature trail, and a museum shop featuring postcards, film, books, Fallingwater furniture reproductions, and gift items. Guided tours are scheduled regularly.

Designated a National Historic Landmark, Fallingwater also was named by the American Institute of Architects in 2000 as the "Building of the Century." 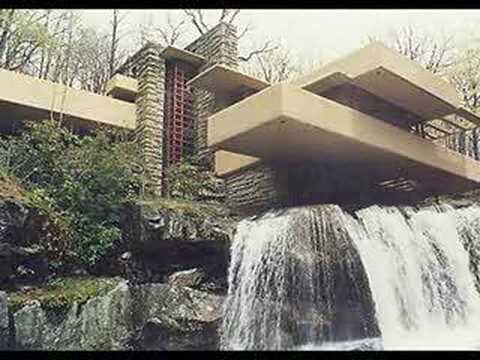