Babe Ruth is sold to the Boston Braves

By this time, Ruth knew he had little left as a player.

His heart was set on managing the Yankees, and he made no secret of his desire to replace McCarthy. However, Ruppert wouldn't consider dumping McCarthy. The slugger and manager had never gotten along, and Ruth's managerial ambitions further chilled their relations. Just before the 1934 season, Ruppert offered to make Ruth manager of the Yankees' top minor-league team, the Newark Bears. However, Ruth's wife, Claire Merritt Hodgson and business manager advised him to reject the offer. After the 1934 season, the only teams that seriously considered hiring Ruth were the Philadelphia Athletics and Detroit Tigers. A's owner/manager Connie Mack gave some thought to stepping down as manager in favor of Ruth, but later dropped the idea, saying that Ruth's wife would be running the team in a month if Ruth ever took over. Ruth was in serious negotiations with Tigers owner Frank Navin, but missed a scheduled interview in late 1934. Meanwhile, Ruppert negotiated with other major-league clubs, seeking one that would take Ruth either as a manager or player.
Boston Braves owner Emil Fuchs finally agreed to take Ruth. Even though the Braves had fielded fairly competitive teams in the last three seasons, Fuchs was sinking in debt and couldn't afford the rent on Braves Field. Fuchs thought Ruth was just what the Braves needed, both on and off the field.
After a series of phone calls, letters and meetings, the Yankees traded Ruth to the Braves on February 26, 1935. It was announced that in addition to remaining as a player, Ruth would become team vice president and would be consulted on all club transactions. He was also made assistant manager to Braves skipper Bill McKechnie. In a long letter to Ruth a few days before the press conference, Fuchs promised Ruth a share in the Braves' profits, with the possibility of becoming co-owner of the team. Fuchs also raised the possibility of Ruth becoming the Braves' manager, perhaps as early as 1936.

Amid much media hoopla, Ruth played his first home game in Boston in over 16 years. Before an opening-day crowd of over 25,000, Ruth accounted for all of the Braves' runs in a 4–2 defeat of the New York Giants. The Braves had long played second fiddle to the Red Sox in Boston, but Ruth's arrival spiked interest in the Braves to levels not seen since their stunning win in the 1914 World Series.
But this couldn't last. That win proved to be the only time the Braves were over .500 that year. By May 20, they were 7–17, and their season was effectively over. While Ruth could still hit, he could do little else, and soon stopped hitting as well. His conditioning had deteriorated so much that he could do little more than trot around the bases. His fielding was dreadful; at one point, three of the Braves' pitchers threatened not to take the mound if Ruth was in the lineup. Ruth was also miffed that McKechnie ignored most of his managerial advice (McKechnie later said that Ruth's presence made enforcing discipline nearly impossible). He soon discovered that he was vice president and assistant manager in name only, and Fuchs' promise of a share of team profits was also hot air. In fact, Fuchs expected Ruth to invest some of his money in the team.
On May 25, at Forbes Field in Pittsburgh, Ruth went 4-for-4, drove in 6 runs and hit 3 home runs in an 11–7 loss to the Pirates. These were the last three home runs of his career. His last home run cleared the roof at the old Forbes Field—he became the first player to accomplish that feat. Five days later, in Philadelphia, Ruth played in his last Major League game. He struck out in the first inning and, while playing the field in the same inning, hurt his knee and left the game.
Two days after that, Ruth summoned reporters to the locker room after a game against the Giants and announced he was retiring. He'd wanted to retire as early as May 12, but Fuchs persuaded him to stay on because the Braves hadn't played in every National League park yet. That season, he hit just .181 with six home runs in 72 at-bats. The Braves season went as bad as Ruth's short season. They finished 38–115, the third-worst record in Major League history, just a few percentage points fewer than the infamous 1962 New York Mets. Fuchs finally caved in under mounting debt and lost control of the Braves with just over two months left in the season.

In attempt to draw more fans, the Braves sign an aging Babe Ruth. However at the age of 40, The Babe's best years are behind him. Ruth would homer in his first National League at bat, but there would not be much success that followed. The Bambino hit only .187 and had only four dingers heading into June before The Babe had one last hurrah. In a game at Pittsburgh's Forbes Field the Babe blasted 3 homers in a game against the Pirates. A few days later Babe Ruth would retire with an All-time record 714 career Homers, a record that would last 40 years. While Babe Ruth was struggling to come up with the form that made him a legend, the Braves were just hoping to win a game. The Braves would suffer their worst season in franchise history with a record of 38-115.

He played out his string with the Boston Braves in 1935; even a washed-up Babe was still able to pole three circuit clouts in one game before calling it quits after 28 games and six dingers in that last season. The following year, he was one the inaugural inductees into the Baseball Hall of Fame. Yes, the Babe was mighty, and he did prevail (more often than naught) except over one opponent: Father Time. 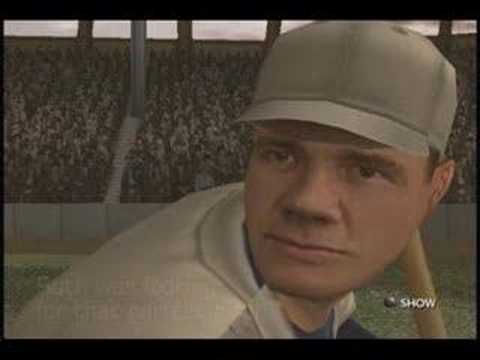