Still suspicious of Luciano after the Weinberg betrayal, gangland legend has it that Schultz soon went before an emergency meeting of the Mafia Commission and asked permission to kill his enemy U.S. Attorney Thomas Dewey.

While some Commission members, including Albert Anastasia and Jacob Shapiro, supported Schultz's proposal, the majority were against it on the basis that the full weight of the authorities would come down on them if they were to murder Dewey, and they voted unanimously against the proposal. Bonanno family boss Joseph Bonanno thought the idea was "insane." Schultz was furious at the outcome of the vote; he accused the Commission of trying to steal his rackets and "feed him to the law." After Schultz left in a rage, the Commission decided finally to kill him in order to prevent the Dewey hit. Calabrian immigrant Albert Anastasia was ordered to arrange Schultz's assassination and assigned Jewish mobster Louis Buchalter to take care of it.

At 10:15 p.m. on October 23, 1935, Schultz was shot at the Palace Chophouse at 12 East Park Street in Newark, New Jersey, which he was using as his new headquarters. Two bodyguards and Schultz's accountant were also killed.

Schultz was in the men's room when Charles Workman and Emanuel "Mendy" Weiss, two hitmen working for Buchalter's Murder, Inc., entered the establishment. Accounts vary as to what happened next, specifically regarding the order in which the two men killed Schultz and his crew. Workman's later account of entering the bathroom to find Schultz either urinating or washing his hands suggested that he managed to slip past the crew and that Schultz was either the first to be shot or that he and Weiss opened fire simultaneously.

Workman fired two rounds at Schultz; only one struck him, slightly below his heart, and it ricocheted around his abdomen before exiting from the small of his back. Schultz collapsed onto the men's room floor, and Workman joined Weiss in the back room of the restaurant. Both men fired several rounds at Schultz's crew: Otto Berman, Schultz's accountant; Abe Landau, Schultz's chief henchman; and Schultz's bodyguard, Bernard "Lulu" Rosencrantz. Berman collapsed onto the floor immediately after being shot. Despite being mortally wounded (Landau's carotid artery was severed by a bullet passing through his neck, whereas Rosencrantz was struck repeatedly at point blank range with 00 lead buckshot), both men rose to their feet and returned fire against Workman and Weiss, driving them out of the restaurant. Weiss entered the getaway car and instructed the driver to abandon Workman; Landau chased Workman out of the bar and fired the remaining bullets in his gun at him but was unable to strike him. Workman fled the scene on foot and Landau collapsed onto a nearby trash can.

Shortly after Workman fled, Schultz, not wanting to die on a bathroom floor, staggered out of the bathroom, clutching his side, and sat down at his table; he called out for anyone who could hear him to get an ambulance. Rosencrantz, who had collapsed while chasing Workman from the Palace Chophouse, rose to his feet and demanded that the barman (who had hidden beneath the bar during the shootout) give him five nickels in exchange for his quarter. Rosencrantz then placed a call for an ambulance before losing consciousness in the telephone booth.

When the ambulance arrived, medics determined that Landau (who had all but bled to death) and Rosencrantz (who was unconscious in the phone booth) were the most seriously wounded of the four men and had them transported to the hospital first; a call was placed to send a second ambulance for Schultz and Berman. Although Berman was unconscious, Schultz was drifting in and out of lucidity, and while he waited for medical attention police attempted to comfort him and get information about his assailants. Because the medics lacked pain-relieving medication, Schultz was given brandy in an attempt to relieve his suffering. When the second ambulance arrived, Schultz gave one of the responding medics $10,000 in cash to ensure that he received the best possible treatment. After surgery, when it looked as if Schultz would live, the medic was so worried that he would be indebted to the mobster for keeping the money that he shoved the money back in bed with Schultz.

Otto Berman, the oldest and least physically fit of the four men, was the first to die, at 2:20 that morning. At the hospital, Landau and Rosencrantz waited for surgery and refused to say anything to the police until Schultz arrived and gave them permission; even then, they provided the police with only minimal information. Abe Landau died of exsanguination eight hours after the shooting. Meanwhile, Rosencrantz was taken into surgery; the doctors, incredulous that Rosencrantz was still alive despite voluminous blood loss and ballistic trauma, were unsure of how to treat him. He survived for 29 hours after the shooting before succumbing to his injuries.

Before Schultz went to surgery, he received the last rites from a Catholic priest at his request. During his second trial, Schultz decided to convert to Catholicism and had been studying its teachings ever since, convinced that Jesus had spared him prison time. Doctors performed surgery but were unaware of the extent of damage done to his abdominal organs by the ricocheting bullet. They were also unaware that Workman had intentionally used rust-coated bullets in an attempt to give Schultz a fatal bloodstream infection (septicemia) should he survive the gunshot. Schultz lingered for 22 hours, speaking in various states of lucidity with his wife, mother, a priest, police, and hospital staff, before dying of peritonitis.

Although Schultz's empire was meant to be crippled, several of his associates survived the night. Martin "Marty" Krompier, whom Schultz left in charge of his Manhattan interests while he hid in New Jersey, survived an assassination attempt concurrent with the Palace Chophouse shooting, and no apparent attempt was made on the life of Irish-American mobster John M. Dunn, who later became the brother-in-law of mobster Edward J. McGrath and a powerful member of the Hells Kitchen Irish mob.

Charles Workman was eventually convicted of Schultz's murder and sent to Sing Sing to serve a 23-year sentence. Upon his arrival, Workman requested to see Warden Lewis Lawes. Workman wanted to be housed in the same cell block as several of his old friends who were incarcerated there; his request was not granted. Emmanuel Weiss was electrocuted for an unrelated killing in 1944 on the same evening as Louis "Lepke" Buchalter.

WHEN THE AMBULANCES ROLLED INTO NEWARK CITY HOSPITAL with that badly mauled dinner party from the Palace Chop House, the two internes on surgical duty, Edward J. Yorke and Royal A. Schaaf, had 14 minutes to go before signing out on a 48-hour weekend break. Instead, just after midnight, they formed the nucleus of a 20-man operating team which would go to work in relays for the next 27 hours and 20 minutes in a heroic but vain effort to reverse a judgment made by some professional men in another calling.

While it surely did not occur to the medical fraternity, the incidental stakes for Newark were rather high: if all four victims died, New Jersey's largest city would acquire the unhappy distinction of having served as host for the second largest multiple gangland execution in the nation's history. The St. Valentine's Day Massacre in Al Capone's adopted Chicago, just six years before, came quickly to mind as the lights burned through the long night at Police Headquarters. In that panorama of death, five card-carrying members of the Bugs Moran gang and two casual visitors had been lined up against a garage wall on North Clark Street and cut down in the withering fire of two machine guns and two shotguns. There was no suspense at all in arriving at the casualty toll in that one. It was just a matter of counting seven bodies. 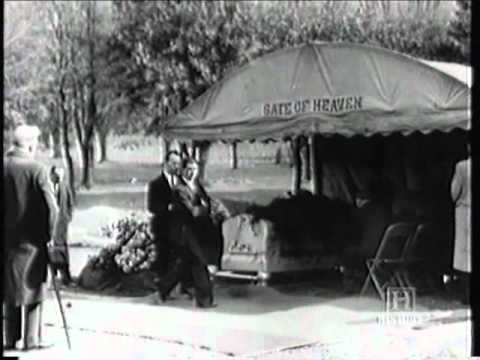