The Chrysler Airflow is an automobile produced by the Chrysler Corporation from 1934 to 1937.

The Airflow was the first full-size American production car to use streamlining as a basis for building a sleeker automobile, one less susceptible to air resistance. Chrysler made the first effort at a fundamental change in automotive design with the Chrysler Airflow, but it was ultimately a commercial failure.

The basis for the Chrysler Airflow was rooted in Chrysler Engineering's Carl Breer's curiosity about how forms affected their movement through the environment. According to Chrysler, Breer's quest was started while watching geese travel through the air in a "V" flight pattern. Another source lists Breer as watching military planes on their practice maneuvers, while still other sources attach the genesis of the project to Breer's interest in lighter than air airships and how their shapes helped them move through the atmosphere.

Breer, along with fellow Chrysler engineers Fred Zeder and Owen Skelton, began a series of wind tunnel tests, with the cooperation of Orville Wright, to study which forms were the most efficient shape created by nature that could suit an automobile. Chrysler built a wind tunnel at the Highland Park site, and tested at least 50 scale models by April 1930. Their engineers found that then-current two-box automobile design was so aerodynamically inefficient, that it was actually more efficient turned around backwards. Applying what they had learned about shape, the engineers also began looking into ways that a car could be built, which also used monocoque (unibody) construction to both strengthen the construction (the strengthening was used in a publicity reel) of the car while reducing its overall drag, and thus increasing the power-to-drag ratio as the lighter, more streamlined body allowed air to flow around it instead of being caught through upright forms, such as radiator grilles, headlights and windshields.
Traditional automobiles of the day were the typical two-box design, with about 65% of the weight over the rear wheels. When loaded with passengers, the weight distribution tended to become further imbalanced, rising to 75% or more over the rear wheels, resulting in unsafe handling characteristics on slippery roads. Spring rates in the rear of traditional vehicles were, therefore, necessarily higher, and passengers were subjected to a harsher ride.
An innovative suspension system on the new Chrysler Airflow stemmed from the need for superior handling dynamics. The engine was moved forward over the front wheels compared with traditional automobiles of the time, and passengers were all moved forward so that they were seated within the wheelbase, rather than on top of the rear axle. The weight distribution had approximately 54% of the weight over the front wheels, which evened to near 50-50 with passengers, and resulted in more equal spring rates, better handling, and far superior ride quality.

It was 1934 and the world was in the midst of a deep economic depression.
The word STREAMLINE started to circulate.
Engineers understood what it meant but the general public was not quite ready for major changes in automobile design that it would bring.
However Walter P Chrysler and Chrysler Corporation tried to show the world what was in the future.
The world wasn't ready for the Chrysler Airflow or its lower priced counterpart, the DeSoto Airflow
Despite its commercial failure, Chrysler's attempt at innovation made it one of the most important
vehicles of the 1930's.
Not only did the Airflow lead the way in terms of aerodynamics (or "streamlining" as it was then called), it was the first mass-market car in the world to use the "modern" architecture that has now become standard.
The passengers comfortably rode in a roomy interior between the axles. Power was supplied to the rear wheels by a front mounted in-line eight engine, pushing the Airflow into higher than normal speeds while maintaining good economy.
The Airflow had many revolutionary ideas, like the placement of a portion of the engine ahead of the front axle, which allowed moving the passenger compartment forward.
The frame was also different. Instead of the simple ladder frames used in that period, the Airflow used a, space-frame, which was similar to the best contemporary practices. This was what today would be known as a unibody construction. The Airflow's frame ran up the fender line, across and encircling the door openings.
This made a very rigid car.
However, as modern as the Airflow was, it wasn't accepted by the buying public and the car was
only in production for four years.
Introduced in 1934, production was ceased in 1937. 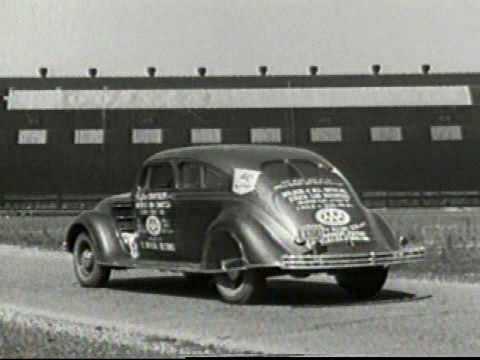 View other events that happened in 1934