"One Hour With You" Is Released

One Hour with You is a 1932 film nominated for the Academy Award for Best Picture.

It was written by Samson Raphaelson and his assistant Sam Bellas from the Lothar Schmidt play Only a Dream, and was directed by George Cukor and Ernst Lubitsch.

The film is a musical comedy starring Maurice Chevalier, Jeanette MacDonald, Genevieve Tobin and Charles Ruggles. The story concerns a married couple who find themselves attracted to other people.

In 1932, the film was Oscar nominated for Best Picture.

A musical remake of The Marriage Circle (1924), One Hour with You stars Maurice Chevalier as a Parisian doctor and Jeanette MacDonald as his loving wife. Chevalier is scrupulously faithful, much to the chagrin of his lovely female patients. But when MacDonald's best friend Genevieve Tobin insists upon being treated by Dr. Chevalier, it looks to many of those concerned that Tobin may succeed where the other willing ladies failed. The misunderstandings and reconciliations of the plotline are playfully staged with deliberate artificiality by director Ernst Lubitsch: Characters speak in rhymed couplets, Parisian gendarmes issue orders to their minions to the beat of a ticking clock, and Chevalier regularly talks directly to the audience. One Hour With You is a tuneful confection which is just as refreshing today as it was sixty years ago. ~ Hal Erickson, All Movie Guide 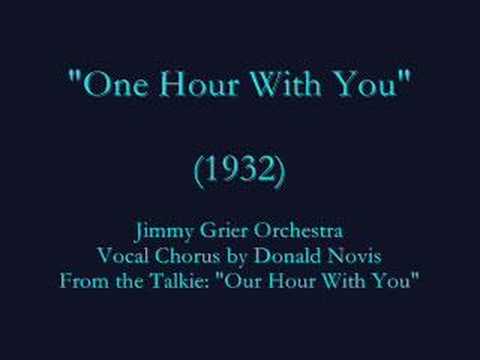