A century passes and the mountain is re-baptized to Corcovado, a name derived from its form, which resembles a hump or hunchback.

The next recordings of christ the redeemer history is in 1924 when Dom Pedro personally led the first official expedition to Corcovado Mountain, resulting in the opening of an accessable way up.

Then in 1859 the Vincentian father Pedro Maria Boss arrived Rio de Janeiro and was struck by the mystorious beauty of the corcovado mountain and suggested the the construction of a religous monument in honour of Princess Isabel, which in 1921 gave way for the idea of a great statue of christ viewable by all in the marvelous city of Rio. From 1859 to 1921, Dom Pedro gave his consent for the building of the Corcovado Railroad line between Cosme Velho and Paineiras, which would be an essential part of undertaking the Redentor.

Christ the Redeemer (Portuguese: O Cristo Redentor, formerly Portuguese: Christo redemptor) is a statue of Jesus Christ in Rio de Janeiro, Brazil; considered the largest Art Deco statue in the world. The statue is 39.6 metres (130 ft) tall, including its 9.5 meter (31 feet) pedestal, and 30 metres (98 ft) wide. It weighs 635 tons (700 short tons), and is located at the peak of the 700 metres (2,300 ft) Corcovado mountain in the Tijuca Forest National Park overlooking the city. It is one of the tallest of its kind in the world. The statue of Cristo de la Concordia in Cochabamba, Bolivia, is slightly taller, standing at 40.44 metres (132.7 ft) tall with its 6.24 metres (20.5 ft) pedestal and 34.20 metres (112.2 ft) wide. A symbol of Christianity, the statue has become an icon of Rio and Brazil. It is made of reinforced concrete and soapstone, and was constructed between 1922 and 1931. 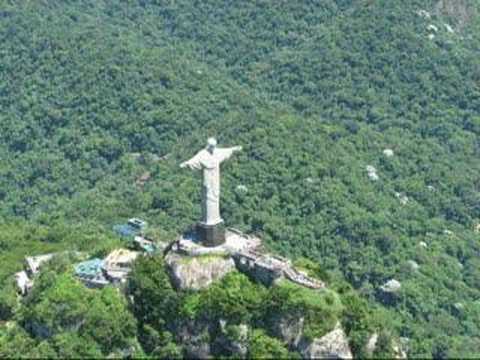