The German Pavilion for the International Exposition in Barcelona is Completed

The Barcelona Pavilion, designed by Ludwig Mies van der Rohe, was the German Pavilion for the 1929 International Exposition in Barcelona, Spain.

This building was used for the official opening of the German section of the exhibition. It was an important building in the history of modern architecture, known for its simple form and extravagant materials, such as marble and travertine.

Mies was offered the commission of this building in 1928 after his successful administration of the 1927 Werkbund exhibition in Stuttgart. The German Republic entrusted Mies with the artistic management and erection of not only the Barcelona Pavilion, but for the buildings for all the German sections at the 1929 Universal Exhibition. However, Mies had severe time constraints — he had to design the Barcelona Pavilion in less than a year — and was also dealing with uncertain economic conditions.

In the years following World War I, Germany started to turn around. The economy started to recover after the 1924 Dawes Plan. The pavilion for the Universal Exhibition was supposed to represent the new Weimar Germany: democratic, culturally progressive, prospering, and thoroughly pacifist; a self-portrait through architecture. The Commissioner, Georg von Schnitzler said it should give "voice to the spirit of a new era". This concept was carried out with the realization of the "free plan" and the "floating room".

Mies's response to the proposal by von Schnitzler was radical. After rejecting the original site because of aesthetic reasons, Mies agreed to a quiet site at the narrow side of a wide, diagonal axis, where the pavilion would still offer viewpoints and a route leading to one of the exhibition's main attractions, the "Spanish Village". The pavilion was going to be bare—no trade exhibits—just the structure, a single sculpture and purpose-designed furniture (the Barcelona Chair). This lack of accommodation enabled Mies to treat the Pavilion as a continuous space; blurring inside and outside. "The design was predicated on an absolute distinction between structure and enclosure—a regular grid of cruciform steel columns interspersed by freely spaced planes". However, the structure was more of a hybrid style, some of these planes also acted as supports. The floor plan is very simple. The entire building rests on a plinth of ttavertine. A southern U-shaped enclosure, also of travertine, helps form a service annex and a large water basin. The floor slabs of the pavilion project out and over the pool—once again connecting inside and out. Another U-shaped wall on the opposite side of the site also forms a smaller water basin. This is where the statue by Georg Kolbe sits. The roof plates, relatively small, are supported by the chrome-clad, cruciform columns. This gives the impression of a hovering roof. Robin Evans said that the reflective columns appear to be struggling to hold the "floating" roof plane down, not to be bearing its weight. Mies wanted this building to become "an ideal zone of tranquility" for the weary visitor, who should be invited into the pavilion on the way to the next attraction. Since the pavilion lacked a real exhibition space, the building itself was to become the exhibit. The pavilion was designed to "block" any passage through the site, rather, one would have to go through the building. Visitors would enter by going up a few stairs, and due to the slightly sloped site, would leave at ground level in the direction of the "Spanish Village". The visitors were not meant to be led in a straight line through the building, but to take continuous turnabouts. The walls not only created space, but also directed visitor's movements. This was achieved by wall surfaces being displaced against each other, running past each other, and creating a space that became narrower or wider.

Another unique feature of this building is the exotic materials Mies chooses to use. Plates of high-grade stone materials like veneers of Tinos verde antico marble and golden onyx as well as tinted glass of grey, green, white, as well as translucent glass, perform exclusively as spatial dividers.

Because this was planned as an exhibition pavilion, it was intended to exist only temporarily. The building was torn down in early 1930, not even a year after it was completed. However, thanks to black and white photos and original plans, a group of Spanish architects reconstructed the pavilion permanently between 1983 and 1986.

The Pavilion was not only a pioneer for construction forms with a fresh, disciplined understanding of space, but also for modeling new opportunities for an association of free art and architecture. Mies placed Georg Kolbe's Alba ("Dawn") in the small water basin, leaving the larger one all the more empty. The sculpture also ties into the highly reflective materials Mies used—he chose the place where these optical effects would have the strongest impact; the building offers multiple views of Alba. "From now on, in the sense of equality for juxtaposing building and visual work, sculptures were no longer to be applied retrospectively to the building, but rather to be a part of the spatial design, to help define and interpret it. To the day, one of the most notable examples is the Barcelona Pavilion".

The original 1929 pavilion building, despite its enormous influence on the emerging International Style of architecture, was demolished the year after the International Exhibition when nobody wanted to buy it from the German Government. It was recreated in its original form and on the same site in 1981-1986 by the Barcelona City Council.

Despite its apparently simple rectangular plan, there are almost no corners in the building, or anything that might suggest you are in a box. The generous canopy roof, walls that stop well short of abutting one another, and the floor-to-ceiling glazing break down the distinction between inside and outside. Even the doors are in the form of two halves of an all-glass wall, which rotate not about hinges at their edges, but about a pivot in the floor and ceiling a few inches from the edge: the result is that when opened through ninety degrees each door becomes just another freestanding, parallel glass plane in keeping with the other planes defining the spaces in the building. 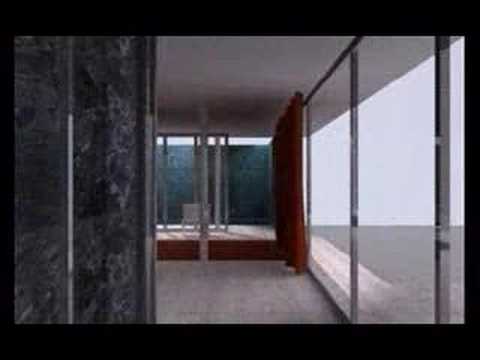