To satisfy the state's need for increased food supplies, the First Five-Year Plan called for the organization of the peasantry into collective units that the authorities could easily control.

This collectivization program entailed compounding the peasants' lands and animals into collective farms (kolkhozy) and state farms (sovkhozy) and restricting the peasants' movement from these farms. The effect of this restructuring was to reintroduce a kind of serfdom into the countryside. Although the program was designed to affect all peasants, Stalin in particular sought to eliminate the wealthiest peasants, known as kulaks. Generally, kulaks were only marginally better off than other peasants, but the party claimed that the kulaks had ensnared the rest of the peasantry in capitalistic relationships.

In November 1927, Joseph Stalin launched his "revolution from above" by setting two extraordinary goals for Soviet domestic policy: rapid industrialization and collectivization of agriculture. His aims were to erase all traces of the capitalism that had entered under the New Economic Policy and to transform the Soviet Union as quickly as possible, without regard to cost, into an industrialized and completely socialist state.

Stalin's First Five-Year Plan, adopted by the party in 1928, called for rapid industrialization of the economy, with an emphasis on heavy industry. It set goals that were unrealistic-- a 250 percent increase in overall industrial development and a 330 percent expansion in heavy industry alone. All industry and services were nationalized, managers were given predetermined output quotas by central planners, and trade unions were converted into mechanisms for increasing worker productivity. Many new industrial centers were developed, particularly in the Ural Mountains, and thousands of new plants were built throughout the country. But because Stalin insisted on unrealistic production targets, serious problems soon arose. With the greatest share of investment put into heavy industry, widespread shortages of consumer goods occurred.

The First Five-Year Plan also called for transforming Soviet agriculture from predominantly individual farms into a system of large state collective farms. The Communist regime believed that collectivization would improve agricultural productivity and would produce grain reserves sufficiently large to feed the growing urban labor force. The anticipated surplus was to pay for industrialization. Collectivization was further expected to free many peasants for industrial work in the cities and to enable the party to extend its political dominance over the remaining peasantry.

Stalin focused particular hostility on the wealthier peasants, or kulaks. About one million kulak households (some five million people) were deported and never heard from again. Forced collectivization of the remaining peasants, which was often fiercely resisted, resulted in a disastrous disruption of agricultural productivity and a catastrophic famine in 1932-33. Although the First Five-Year Plan called for the collectivization of only twenty percent of peasant households, by 1940 approximately ninety-seven percent of all peasant households had been collectivized and private ownership of property almost entirely eliminated. Forced collectivization helped achieve Stalin's goal of rapid industrialization, but the human costs were incalculable.

Joseph Stalin was furious that the peasants were putting their own welfare before that of the Soviet Union. Local communist officials were given instructions to confiscate kulaks property. This land would then be used to form new collective farms. The kulaks themselves were not allowed to undermine the success of the scheme. Thousands were executed and an estimated five million were deported to Siberia or Central Asia. Of these, approximately twenty-five per cent perished by the time they reached their destination. 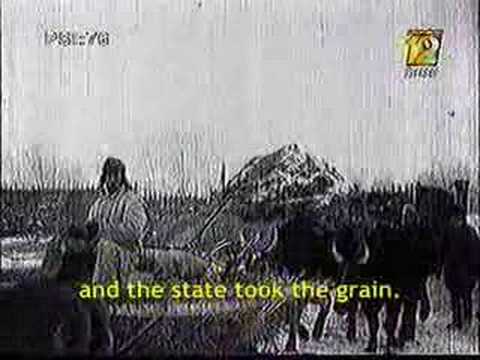