"The New Janitor" (film) is Released

The New Janitor was the 27th comedy from Keystone Studios to feature Charlie Chaplin.

The film is arguably one of his best for the studio, and a precursor to a key Essanay Studios short, The Bank. The film also demonstrates the differences that Chaplin had with Keystone comedy --- this film is a coherent whole in which the stock characters actually fill some emotional center. Chaplin brings a certain complexity to his janitor, unusual to the comedy factory of Mack Sennett. The film, which stars among Sennett's bit players Jess Dandy, Al St. John, John T. Dillon, and Minta Durfee, is far more centered and clear in direction. Comedy flows from within the story rather than as a by-product of story. After all this is a typical bank robbery storyline.

The hero, a janitor played by Chaplin, is fired from work for accidentally knocking his bucket of water out the window and onto his boss the chief banker (Tandy). Meanwhile, one of the junior managers (Dillon) is being threatened with exposure by his bookie for gambling debts unpaid. Thus the manager decides to steal from the company. He is caught in the act of raiding the vault by the bank secretary (Durfee) who rings the downstairs for help. Chaplin comes to the rescue only to be misjudged by the Chief Banker as the thief. The Secretary fingers the manager and Charlie receives a just reward and a handshake for foiling the robbery. 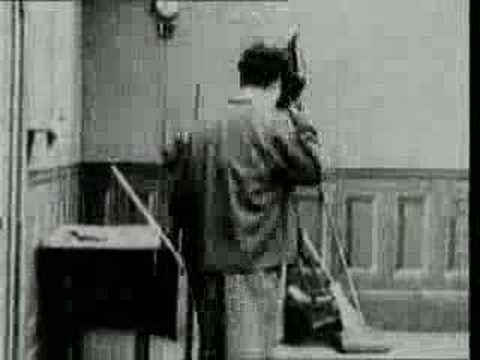