Another one of Houdini's most famous publicity stunts (Dalton) was to escape from a nailed and roped packing crate after it had been lowered into the water.

Houdini first performed the escape in New York's East River on July 7, 1912. Police forbade him from using one of the piers, so Houdini hired a tugboat and invited press on board. Houdini was locked in handcuffs and leg-irons, then nailed into the crate which was roped and weighed down with two hundred pounds of lead. The crate was then lowered into water. Houdini escaped in fifty-seven seconds. The crate was pulled to the surface and found to still be intact with the manacles inside. Houdini would perform this escape many times, and even performed a version on stage, first at Hamerstein's Roof Garden (where a 5,500-gallon tank was specially built), and later at the New York Hippodrome.

Hi. Glad To Meet You at your Interesting forum!
I am newbie here! Let me introduce myself.
I am fat female Anna from Canada.
I like this cool board! ;) 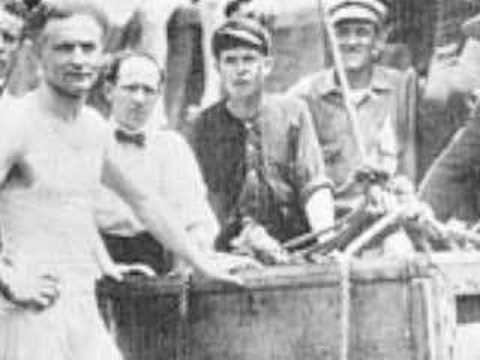