The Ford Model T (colloquially known as the Tin Lizzie and Flivver) is an automobile that was produced by Henry Ford's Ford Motor Company from 1908 through 1927.

The Model T set 1908 as the historic year that the automobile came into popular usage. It is generally regarded as the first affordable automobile, the car that "put America on wheels"; some of this was because of Ford's innovations, including assembly line production instead of individual hand crafting, as well as the concept of paying the workers a wage proportionate to the cost of the car, so they would provide a ready made market. The first production Model T was built on September 27, 1908, at the Piquette Plant in Detroit, Michigan. The Model T was the first automobile mass produced on assembly lines with completely interchangeable parts, marketed to the middle class.

There were several cars produced or prototyped by Henry Ford from the founding of the company in 1903 until the Model T came along. Although he started with the Model A, there were not 19 production models (A through T); some were only prototypes. The production model immediately before the Model T was the Model S, an upgraded version of the company's largest success to that point, the Model N. The follow-up was the Ford Model A and not the Model U. Company publicity said this was because the new car was such a departure from the old that Henry wanted to start all over again with the letter A. As it happens, the first Plymouth car (1928), built by competitor Chrysler Corporation, was named the Model U.
The Ford Model T was named the world's most influential car of the twentieth century in an international poll. Henry Ford said of the vehicle:
"I will build a car for the great multitude. It will be large enough for the family, but small enough for the individual to run and care for. It will be constructed of the best materials, by the best men to be hired, after the simplest designs that modern engineering can devise. But it will be low in price that no man making a good salary will be unable to own one - and enjoy with his family the blessing of hours of pleasure in God's great open spaces."

The Ford Model T car was designed by Childe Harold Wills and two Hungarian immigrants, Joseph A. Galamb and Eugene Farkas. Harry Love, C. J. Smith, Gus Degner and Peter E. Martin were also part of the team. While production of the Model T began in the autumn of 1908, model years range from 1909 to 1927.

The Model T had a 177 in3 (2.9 L) front mounted inline four-cylinder en bloc engine (that is, all four in one block, as common now, rather than in individual castings, as common then) producing 20 hp (15 kW) for a top speed of 40-45 mph (64–72 km/h). The Model T four cylinder sidevalve engine was first in the world with a detachable head, making service like valve jobs easier. According to Ford Motor, the Model T had fuel economy on the order of 13 to 21 mpg (5 to 9 kilometres per litre or 11.1 to 18.7 litres per 100 km). The engine was capable of running on gasoline, kerosene, or ethanol, though the decreasing cost of gasoline and the later introduction of Prohibition made ethanol an impractical fuel.

1926 engine
A flywheel magneto (broadly equivalent to a modern alternator) produced low voltage alternating current. The low voltage was ditributed by the timer (analogous to a distributor in a modern vehicle) to one of the four trembler coils, one for each cylinder. The coil created a high voltage current, directly connected to the spark plug in the firing cylinder. Ignition timing was adjusted manually by using the spark advance lever mounted on the steering column which rotated the timer. A battery could be used for starting current: at hand-cranking speed, the magneto did not always produce sufficient current (but a starting battery was not standard equipment until sometime in 1926, though all T's had a bat position on the coil box switch). A certain amount of skill and experience was required to find the optimal timing for any speed and load. When electric headlights were introduced in 1915, the magneto was upgraded to supply power for the lights and horn. In keeping with the goal of ultimate reliability and simplicity, the trembler coil and magneto ignition system was retained even after the car became equipped with a generator and battery for electric starting and lighting. Most cars sold after 1919 were equipped with electric starting, which was engaged by a small round button on the floor in front of the driver's seat.

1910 Model T, photographed in Salt Lake City
Before starting a Model T with the hand crank, the spark had to be manually retarded or the engine might "kick back". The crank handle was cupped in the palm, rather than grabbed with the thumb under the top of the handle, so that if the engine did kick back, the rapid reverse motion of the crank would throw the hand away from the handle, rather than violently twisting the wrist or breaking the thumb. Most Model T Fords had the choke operated by a wire emerging from the bottom of the radiator where it could be operated with the left hand. This was used to prime the engine while cranking the engine slowly then starting the engine with the left hand with a rapid pull of the crank handle.
The car's ar's 10 gallon (38 litre) fuel tank was mounted to the frame beneath the front seat; one variant had the carburetor (a Holley Model G) modified to run on ethyl alcohol, to be made at home by the self-reliant farmer. Because Ford relied on gravity to feed fuel to the carburetor, rather than a fuel pump, a Model T could not climb a steep hill when the fuel level was low. The immediate solution was often to drive up steep hills in reverse. In 1926, the fuel tank was moved forward to under the cowl on most models.
Early on, the engine blocks were to be produced by the Lakeside Foundry on St. Jean in Detroit. Ford cancelled the deal before many were produced.
While the first few hundred Model Ts had a water pump, its use was abandoned early in production. Ford opted for a cheaper and more reliable circulation system based on the thermo-syphon principle. Hot water, being less dense, would rise to the top of the engine and up into the top of the radiator, descending to the bottom as it cooled, and back into the engine. This was the direction of water flow in most makes of cars even when they did have water pumps, until the introduction of crossflow radiator designs. Many types of water pumps were available as aftermarket accessories.

Ford is often quoted as saying "I will build a motorcar for the great multitude". At the time it was a revolutionary business model to lower a product's cost and the company's profit margin in exchange for increased sales volume. Up until this point in time the automobile had been a status symbol and cars were painstakingly built by hand for the wealthy. By the end of 1913 Ford's application of the moving assembly line had improved the speed of chassis assembly from 12 hours and eight minutes to one hour and 33 minutes. In 1914 Ford produced 308,162 cars, which was more than all 299 other auto manufacturers combined. By the time the last Model T was built in 1927, the company was producing an automobile every 24 seconds.

The first production Model T Ford (1909 model year) was assembled at the Piquette Avenue Plant in Detroit on October 1, 1908. Over the next 19 years relatively few fundamental changes were made to the basic design. By 1926 the design was so antiquated that the Model T could not compete with more modern offerings from competitors like Chevrolet. 1927 was the last year for Henry's lady, the "Universal Car".

In 1906, Ford secretly set up a place to build his cars in a building on Piquette Avenue in Detroit. Ford spent nearly two years designing the Model T, building on knowledge gained from the production of earlier cars, like his Ford Model N.

While Henry Ford and his team were planning for his new car, he attended a race in Florida where he examined the wreckage of a French race car. He observed that it was made of a different kind of steel and the car parts were lighter than those he had been previously seen. He learned that this new steel was a vanadium alloy and that it had almost three times the tensile strength of the alloys used by his contemporary American auto makers. No one in America knew how to make vanadium steel so Ford financed and set up a steel mill. As a result, the only cars in the world to utilize vanadium steel over the next five years would be French luxury cars and the Ford Model T. Ford's use of vanadium steel explains why so many Model T Fords have survived today.

Henry's Model T changed the world forever. In 1909, for $825, a Ford customer could buy a reliable automobile that was fairly easy to drive. Ford sold over ten thousand Model T cars in the first year of production, a new record for any automobile model.

Ford applied the moving assembly line concept to his production facility late in 1913. His staff constantly monitored productive and relentlessly analyzed the statistical measures to optimize worker productivity. Over the years, Model T Fords came in many different models, all built with the essentially same engine and chassis: the Model T roadster, coupe, coupelet, runabout, roadster torpedo, town car, touring, and the fordor and tudor sedans.

It was on October 1,1908, just about a month before William Howard Taft defeated William Jennings Bryan for the Presidency of the United States, that the Ford Motor Company unveiled the little machine that many historians think of as the most significant automobile of all time -- the 1908-1927 Ford Model T.

Henry Ford called it the Model T-hardly surprising since Henry had already run through the alphabet from A to S, though a lot of letters were skipped along the way. It was built only as a touring car at first, but within a few months a number of other body styles would be added to the line. Strictly a utilitarian vehicle, the Ford took no beauty prizes, and it won no speed contests.

Still, its 22-horsepower, four-cylinder engine could propel the 1,200-pound car to a top speed of between 35 and 40 miles an hour, adequate for the mostly unpaved roads of the era. Cooling was by the primitive thermo-siphon method, lubrication via a splash system. The gas tank nestled beneath the front seat, its fuel being fed to the engine by the force of gravity. Meanwhile, the driver shifted the two-speed planetary transmission with foot pedals. The car didn't even have demountable rims at first, though in 1919 they became available for an extra $25.

Widely known as the "Tin Lizzie," the little Ford became the butt of a thousand jokes. But it was this machine, more than all the others combined, that was responsible for putting America -- and ultimately the world -- on wheels. On the strength of the Model T, Ford's yearly production would increase from 10,000 cars in 1908 to nearly two million 15 years later. As early as 1913, in fact, Ford was literally outproducing all the rest of the nation's automakers put together!
On the next page, you will learn about the creation of the Ford Model T. 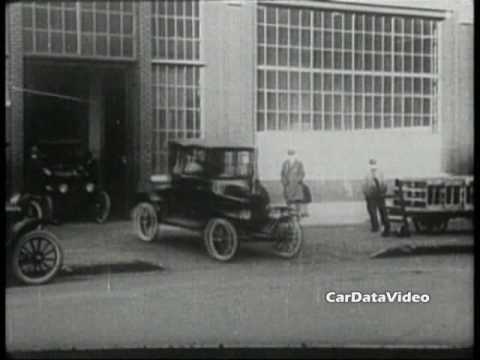 View other events that happened in 1908