Of the Sixteen People on Ill-fated Train, Not One Escaped Serious Injury -Scene of Wreck Was Long Trestle Just North of Danville, Va.--Railroad Men Believe Accident Was Caused by the Breaking of a Flange on the Engine Wheel.

Charlotte, N. C. Sept. 27.--While running thirty or thirty-five miles an hour, train No. 97, on the Virginia Midland branch of the Southern Railroad, jumped from a trestle seventy-five feet high, half a mile north of Danville, Va., this afternoon, and was almost demolished.

The wrecked train was exclusively for mail and freight, consisting of four postal cars and one express car, and was southbound. Of the sixteen persons on the train, nine were killed and seven injured.

The wreck of Old 97 occurred when the engineer, 33 year old Joseph A. ("Steve") Broadey, at the controls of engine number 1102, was operating the train at high speed in order to stay on schedule and arrive at Spencer on time (The Fast Mail had a reputation for never being late). The engine that was pulling train 97 that day was locomotive #1102, a ten wheeler (4-6-0) engine built by Baldwin Locomotive Works in Philadelphia. #1102 rolled out of the factory in early 1903, less than a year before the wreck. After the wreck the engine was rebuilt and served for nearly 30 years before being scrapped July 9th, 1935.

Engineer Broadey and two firemen boarded the train at Washington, farther up the line from Spencer, the second fireman being assigned to assist in maintaining the steam pressure at its maximum so the train would not lose too much speed on ascending grades. The train was substantially behind schedule upon leaving Washington and was one hour late upon arriving at Monroe.

At Monroe, Broadey was instructed to get the Fast Mail to Spencer, 166 miles distant, on time. The scheduled running time from Monroe to Spencer was four hours, fifteen minutes, an average speed of approximately 39 mph (62.4 km/h). In order to make up the one hour delay, the train's average speed would have to be at least 51 mph (82 km/h). Broadey was ordered to maintain speed through Franklin Junction, an intermediate stop normally made during the run.

The route between Monroe and Spencer was rolling terrain and there were numerous danger points due to the combination of grades and tight radius curves. Signs were posted to warn engineers to watch their speed. However, in his quest to stay on time, engineer Broadey rapidly descended a heavy grade that ended at the 75-foot high Stillhouse Trestle, which spanned Cherrystone Creek. He was unable to sufficiently reduce speed as he approached the curve leading into the trestle, causing the entire train to derail and plunge into the ravine below. Nine people were killed, including the locomotive crew and a number of clerks in the mail car coupled between the tender and the rest of the train.

No ballad composition has touched more Americans than the song describing the wreck of mail train No.97. "Old 97," which consisted of four cars and locomotive No.1102, crashed on September 27, 1903. Running behind schedule, Engineer Joseph A. Broady was trying to make up time as his train approached Danville down a three-mile grade. He realized he did not have enough air pressure to slow the train for an upcoming curved trestle, and in vain he reversed the engine to lock the wheels. "Old 97" vaulted off the trestle, and 11 people were killed. Photographs taken from above the scene ran in newspapers across the country. 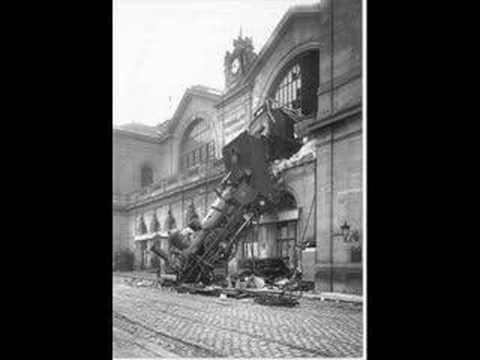