On Tuesday, May 12, 1903, President Theodore Roosevelt paid an official visit to San Francisco.

Cameraman H. J. Miles captured the president's arrival parade on film, and later released the footage as The President's Carriage.

Two days after the Market Street procession, Roosevelt was filmed again as he dedicated Dewey Monument in the city's Union Square. The monument, which is still in place, commemorates the victory of Admiral George Dewey and the American fleet over Spanish forces at Manila Bay during the Spanish-American War. It is also a tribute to the sailors of the U.S. Navy.

Called actuality films, short documentaries such as these of Roosevelt, appeared in nickelodeons throughout America alongside policemen and firemen in action, buildings under construction, and new inventions at work. The themes and conventions of these short films were borrowed from nineteenth century commercial photography. Early audiences, while amazed by the moving images, were very familiar with the subject matter. What is perhaps most interesting about these two actuality films is the view they offer of a city devastated by a massive earthquake and fire just three years after the president's 1903 visit.

Theodore Roosevelt was one of the first presidents whose voice was recorded for posterity. Several of his recorded speeches survive. A 4.6-minute voice recording, which preserves Roosevelt's lower timbre ranges particularly well for its time, is among those available from the Michigan State University libraries. (This is the 1912 recording of The Right of the People to Rule, recorded by Edison at Carnegie Hall). In what some consider the best example of Roosevelt's animated oratorical style, an audio clip sponsored by the Authentic History Center includes his defense of the Progressive Party in 1912 wherein he proclaims it the "party of the people" in contrast with the other major parties. 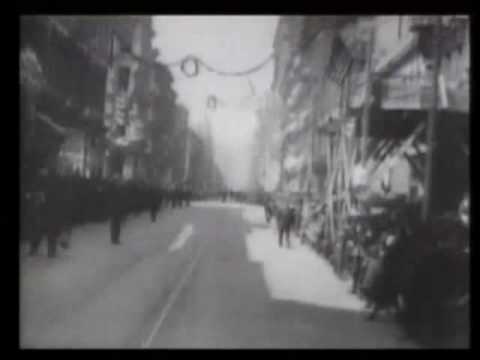