It had estimated winds of 135 miles per hour (217 km/h) at landfall, making it a Category 4 storm on the Saffir-Simpson Hurricane Scale.
The hurricane caused great loss of life with the estimated death toll between 6,000 and 12,000 individuals; the number most cited in official reports is 8,000, giving the storm the third-highest number of casualties of any Atlantic hurricane, after the Great Hurricane of 1780 and 1998’s Hurricane Mitch. The Galveston Hurricane of 1900 is to date the deadliest natural disaster ever to strike the United States. By contrast, the second-deadliest storm to strike the United States, the 1928 Okeechobee Hurricane, caused more than 6,000 deaths, and the deadliest storm of recent times, Hurricane Katrina, claimed the lives of approximately 1,800 people.

In Galveston on the rain-darkened and gusty morning of Saturday, September 8, 1900, newspaper readers saw, on page three of the local Daily News, an early-morning account of a tropical hurricane prowling the Gulf of Mexico. On the previous day Galveston had been placed under a storm warning by the central office of the Weather Bureau (now the National Weather Service) in Washington, D.C. A one-column headline announced, "Storm in the Gulf." Under that, a small subhead proclaimed, "Great Damage Reported on Mississippi and Louisiana Coasts-Wires Down-Details Meagre."

Source: The Handbook of Texas Online Added by: Carla Friedman

The fact that the city of Galveston exists today is the triumph of imagination, hope and determination over reality. Perched precariously on a sand-barrier island in the Gulf of Mexico, Galveston is subject to the whims of inevitable hurricanes.
One of those hurricanes, dancing its deadly way across the Gulf of Mexico in early September 1900, came very close to dealing the city a fatal blow. An estimated 6,000 residents died, and most structures in the city were destroyed or badly damaged. In terms of human life, it remains the worst natural disaster in United States history.
Galveston's leaders took several major steps to recover from the storm and to prevent a recurrence of the devastation.

The hurricane which visited Galveston Island on Saturday, September 8, 1900, was no doubt one of the most important meteorological events in the world's history. The ruin which it wrought beggars description, and conservative estimates place the loss of life at the appalling figure, 6,000.

A brief description of Galveston Island will not be out of place as introductory to the details of this disaster. It is a sand island about thirty miles in length and one and one-half to three miles in width. The course of the island is southwest to northeast, parallel with the southeast coast of the State. The City of Galveston is located on the east end of the island. To the northeast of Galveston is Bolivar Peninsula, a sand spit about twenty miles in length and varying in width from one-fourth of a mile to about three miles. 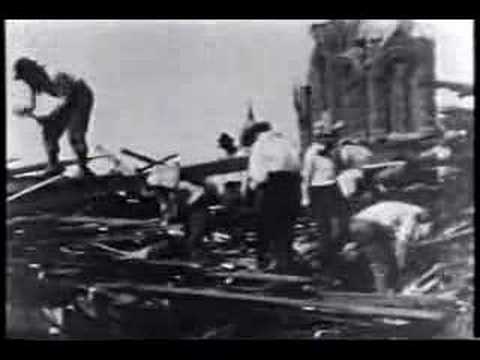