At the turn of the century, the New York City Police Department (NYPD) was still recovering from scandals and allegations of corruption that tarnished its reputation in the 1890s. Four years earlier, the New York State Senate created a committee to investigate the department. The Lexow Committee issued a scathing report detailing serious criminal activity within the organization.

* The film shows members of "New York's Finest" parading at a crowded Union Square. Seen are members of the Bicycle Squad, mounted horses, and two regimental marching bands. At the time of filming, the New York City Police Department was still recovering from the corruption scandals of the early 1890's that had severely tarnished the reputation of the department. A State-Senate-appointed group known as the Lexow Committee investigated the department and issued a scathing report that detailed serious criminal activity within the department. In 1895, public opinion was so low that the annual parade was not held. That same year, Theodore Roosevelt was appointed president of the Police Board, and he is credited with initiating strict and effective reform measures that helped restore the public's confidence in the police. 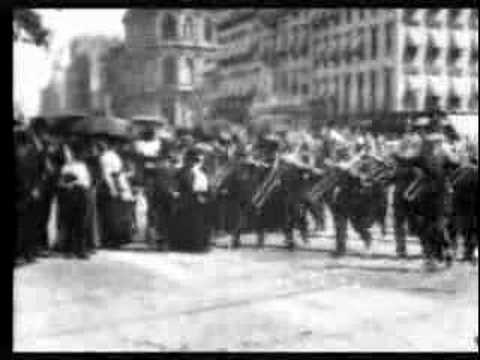