The Statue of Liberty National Monument officially celebrated her 100th birthday on October 28, 1986.

The people of France gave the Statue to the people of the United States over one hundred years ago in recognition of the friendship established during the American Revolution. Over the years, the Statue of Liberty has grown to include freedom and democracy as well as this international friendship.

Sculptor Frederic Auguste Bartholdi was commissioned to design a sculpture with the year 1876 in mind for completion, to commemorate the centennial of the American Declaration of Independence. The Statue was a joint effort between America and France and it was agreed upon that the American people were to build the pedestal, and the French people were responsible for the Statue and its assembly here in the United States. However, lack of funds was a problem on both sides of the Atlantic Ocean. In France, public fees, various forms of entertainment, and a lottery were among the methods used to raise funds. In the United States, benefit theatrical events, art exhibitions, auctions and prize fights assisted in providing needed funds. Meanwhile in France, Bartholdi required the assistance of an engineer to address structural issues associated with designing such as colossal copper sculpture. Alexandre Gustave Eiffel (designer of the Eiffel Tower) was commissioned to design the massive iron pylon and secondary skeletal framework which allows the Statue's copper skin to move independently yet stand upright. Back in America, fund raising for the pedestal was going particularly slowly, so Joseph Pulitzer (noted for the Pulitzer Prize) opened up the editorial pages of his newspaper, "The World" to support the fund raising effort. Pulitzer used his newspaper to criticize both the rich who had failed to finance the pedestal construction and the middle class who were content to rely upon the wealthy to provide the funds. Pulitzer's campaign of harsh criticism was successful in motivating the people of America to donate.

Financing for the pedestal was completed in August 1885, and pedestal construction was finished in April of 1886. The Statue was completed in France in July, 1884 and arrived in New York Harbor in June of 1885 on board the French frigate "Isere" which transported the Statue of Liberty from France to the United States. In transit, the Statue was reduced to 350 individual pieces and packed in 214 crates. The Statue was re-assembled on her new pedestal in four months time. On October 28th 1886, the dedication of the Statue of Liberty took place in front of thousands of spectators. She was a centennial gift ten years late.

The story of the Statue of Liberty and her island has been one of change. The Statue was placed upon a granite pedestal inside the courtyard of the star-shaped walls of Fort Wood (which had been completed for the War of 1812.) The United States Lighthouse Board had responsibility for the operation of the Statue of Liberty until 1901. After 1901, the care and operation of the Statue was placed under the War Department. A Presidential Proclamation declared Fort Wood (and the Statue of Liberty within it) a National Monument on October 15th, 1924 and the monument's boundary was set at the outer edge of Fort Wood. In 1933, the care and administration of the National Monument was transferred to the National Park Service. On September 7, 1937, jurisdiction was enlarged to encompass all of Bedloe's Island and in 1956, the island's name was changed to Liberty Island.

On May 11, 1965, Ellis Island was also transferred to the National Park Service and became part of the Statue of Liberty National Monument. In May of 1982, President Ronald Reagan appointed Lee Iacocca to head up a private sector effort to restore the Statue of Liberty. Fundraising began for the $87 million restoration under a public/private partnership between the National Park Service and the Statue of Liberty-Ellis Island Foundation, Inc., to date the most successful such partnership in American history. In 1984, at the start of the Statue's restoration, the United Nations designated the Statue of Liberty as a World Heritage Site. On July 5, 1986 the newly restored Statue re-opened to the public during Liberty Weekend, which celebrated her centennial. The Statue of Liberty was closed as a result of the tragedy of September 11, 2001. Although Liberty Island re-opened after being closed for 100 days, the Statue remained closed until August 3, 2004. Visitors now have access to the Statue's pedestal obervation deck, promenade, museum and the area of Fort Wood.

The Statue of Liberty (French: Statue de la Liberté), officially titled Liberty Enlightening the World (French: La Liberté Éclairant le Monde), dedicated on October 28, 1886, is a monument commemorating the centennial of the signing of the United States Declaration of Independence, given to the United States by the people of France to represent the friendship between the two countries established during the American Revolution. It represents a woman wearing a stola, a radiant crown and sandals, trampling a broken chain, carrying a torch in her raised right hand and a tabula ansata tablet, where the date of the Declaration of Independence JULY IV MDCCLXXVI is inscribed, in her left arm. Standing on Liberty Island in New York Harbor, it welcomes visitors, immigrants, and returning Americans traveling by ship. Frédéric Auguste Bartholdi sculpted the statue and obtained a U.S. patent for its structure. Maurice Koechlin—chief engineer of Gustave Eiffel's engineering company and designer of the Eiffel Tower—engineered the internal structure. Eugène Viollet-le-Duc was responsible for the choice of copper in the statue's construction and adoption of the repoussé technique, where a malleable metal is hammered on the reverse side.

The statue is made of a sheathing of pure copper, hung on a framework of steel (originally puddled iron) with the exception of the flame of the torch, which is coated in gold leaf (originally made of copper and later altered to hold glass panes). It stands atop a rectangular stonework pedestal with a foundation in the shape of an irregular eleven-pointed star. The statue is 151 ft (46 m) tall, but with the pedestal and foundation, it is 305 ft (93 m) tall.

A ceremony of dedication was held on the afternoon of October 28, 1886. President Grover Cleveland, the former New York governor, presided over the event. On the morning of the dedication, a parade was held in New York City; estimates of the number of people who watched it ranged from several hundred thousand to a million. President Cleveland headed the procession, then stood in the reviewing stand to see bands and marchers from across America. General Stone was the grand marshal of the parade. The route began at Madison Square, once the venue for the arm, and proceeded to Battery Park at the southern tip of Manhattan by way of Fifth Avenue and Broadway, with a slight detour so the parade could pass in front of the World building on Park Row. As the parade passed the New York Stock Exchange, traders threw ticker tape from the windows, beginning the New York tradition of the ticker-tape parade.[88]

A nautical parade began at 12:45 p.m., and President Cleveland embarked on a yacht that took him across the harbor to Bedloe's Island for the dedication. De Lesseps made the first speech, on behalf of the French committee, followed by the chairman of the New York committee, Senator William M. Evarts. A French flag draped across the statue's face was to be lowered to unveil the statue at the close of Evarts's speech, but Bartholdi mistook a pause as the conclusion and let the flag fall prematurely. The ensuing cheers put an end to Evarts's address. President Cleveland spoke next, stating that the statue's "stream of light shall pierce the darkness of ignorance and man's oppression until Liberty enlightens the world". Bartholdi, observed near the dais, was called upon to speak, but he refused. Orator Chauncey M. Depew concluded the speechmaking with a lengthy address. 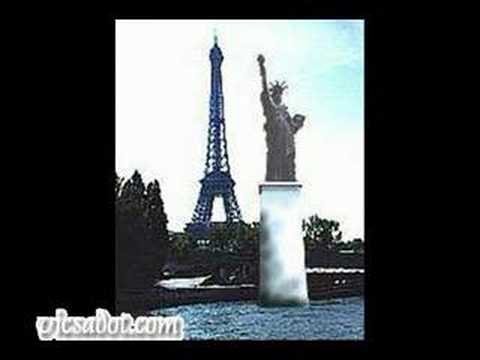