Jumbo the Elephant is Killed by a Locomotive

Jumbo's private car was some distance down the main line, and it was while walking to this that a shrill whistle signaled the approach of an oncoming freight train on the Grand Trunk railroad, on the very same track.

The railroad employee whose job it was to flag down any advancing train while the show was being loaded had, on hearing that the big elephant was coming through the gap, left his post to get a better view. His carelessness was the cause of Jumbo's sad ending.

The defining moment of Jumbo the elephant's life was, in many ways, his untimely death at the age of 24. On September 15, 1885, as the traveling circus was loading the menagerie onto trains in St. Thomas, Ontario, the tragedy occurred. A portion of the fence that ran along the railyard tracks had been removed, allowing the parading animals to descend a small hill and board the cars. Jumbo and the baby clown elephant, Tom Thumb, were ambling toward their "Palace Car" when an unscheduled express freight train roared toward the entourage. Seeing that Jumbo and Tom Thumb were in danger, Scotty scrambled down the adjacent embankment and shouted a warning.

Jumbo died at a railroad classification yard in St. Thomas, Ontario, where he was crushed by a locomotive. Barnum afterwards told the story that Jumbo died saving a young circus elephant, Tom Thumb, from being hit by the locomotive, but other witnesses did not support this.

Many metallic objects were found in the elephant's stomach, including pennies, nickels, dimes, keys, and rivets.

Jumbo's skeleton was donated to the American Museum of Natural History in New York City. The elephant's heart was sold to Cornell University. Jumbo's hide was stuffed by William J. Critchley and Carl Akeley, both of Ward's Natural Science, and the mounted specimen traveled with Barnum's circus for a number of years. In 1889, Barnum donated the stuffed Jumbo to Tufts University, where it was displayed until destroyed by a fire in 1975, coincidentally a fate that befell many of Barnum's exhibits during his own lifetime.

The great elephant's ashes are kept in a 14-ounce Peter Pan Crunchy Peanut Butter jar in the office of the Tufts athletic director, while his taxidermied tail, removed during earlier renovations, resides in the holdings of the Tufts Digital Collections and Archives. A statue of an elephant, dubbed "Jumbo", was purchased from an amusement park and placed on the Tufts campus after the fire. Jumbo became the university's mascot, and remains such to this day. 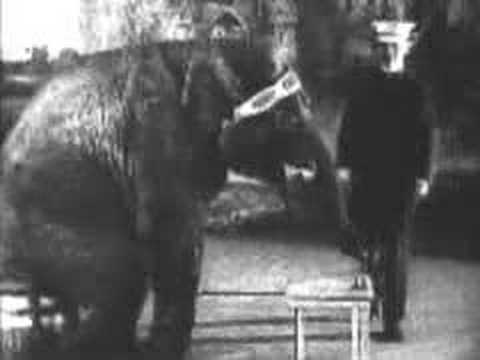