Construction of the statue began in 1875 in France, and was completed in June 1884.

A design patent, for the statue was issued, by the United States Patent Office, on February 18, 1879. The statue was dismantled and shipped to New York, arriving on June 19, 1885. The statue then took four months to rebuild. On Lady Liberty’s tablet is inscribed “July 4, 1776 in Roman numerals, Day of America's Independence from Britain: July 4, 1776”, and inscribed upon the base for the statue is an excerpt from Emma Lazarus poem "The New Colossus".

Source: French at a Touch Site Added by: bob armour

The Statue of Liberty arrived at its permanent home at Bedloe's Island in New York Harbor on June 19, 1885, aboard the French frigate Isere. A gift of friendship from the people of France to the people of the United States, the 151-foot-tall statue was created to commemorate the centennial of the American Declaration of Independence. Designed by sculptor Frederic-Auguste Bartholdi and officially titled Liberty Enlightening the World, the Statue of Liberty has symbolized freedom and democracy to the nation and to the world for over 120 years.

The Statue of Liberty (French: Statue de la Liberté), officially titled Liberty Enlightening the World (French: La liberté éclairant le monde), is a monument that was presented by the people of France to the United States of America in 1886 to celebrate its centennial. Standing on Liberty Island in New York Harbor, it welcomes visitors, immigrants, and returning Americans traveling by ship. The copper-clad statue, dedicated on October 28, 1886, commemorates the centennial of the signing of the United States Declaration of Independence and was given to the United States by France to represent the friendship between the two countries established during the American Revolution. Frédéric Auguste Bartholdi sculpted the statue and obtained a U.S. patent for its structure. Maurice Koechlin—chief engineer of Gustave Eiffel's engineering company and designer of the Eiffel Tower—engineered the internal structure. Eugène Viollet-le-Duc was responsible for the choice of copper in the statue's construction and adoption of the repoussé technique, where a malleable metal is hammered on the reverse side.

Give me your tired, your poor,
Your huddled masses yearning to breathe free,
The wretched refuse of your teeming shore.
Send these, the homeless, tempest-tost to me,
I lift my lamp beside the golden door!” 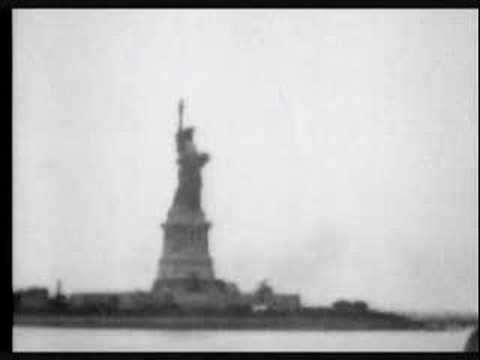