Jefferson Davis (1808-1889), president of the Confederate states (the South) during the Civil War, was captured when the Union Army caught up to him on May 10, 1865, in Irwinville, Georgia. His best general, Robert E. Lee, had surrendered on April 9 at Appomattox in Virginia to General Ulysses S. Grant, which effectively ended the Civil War. When Lee surrendered to the North, Davis and his Cabinet moved south, hoping to continue the struggle until better terms could be secured from the North

Jefferson Davis was captured by the Fourth Michigan cavalry in the early morning of May 10, 1865, at Irwinsville in southern Georgia. With him were Mr. John H. Reagan of Texas, his postmaster general; Captain Moody of Mississippi, an old neighbor of the Davis family; Governor Lubbock of Texas and Colonels Harrison and Johnson of his staff; Mrs. Davis and her four children - Maggie, some 10 years old; Jeff, about 8; Willie, 5; and a girl baby - a brother and sister of Mrs. Davis, a white and one colored servant woman, a small force of cavalry, a few others and a small train of horses, mules, wagons and ambulances. Among the horses were a span of carraige horses presented to Mr. Davis by the citizens of Richmond during the heyday of the Confederacy; also a splendid saddle horse, the pride of the ex-president himself.

On May 10, 1865, Union troops captured Confederate President Jefferson Davis near Irwinville, Georgia. Davis and his Cabinet had retreated from Richmond after General Lee's defeat at Petersburg on April 2, 1865. For several weeks the Confederate government had been in flight from the Union Army. Davis' plan was to escape by sea from the east coast of Florida and to sail to Texas where he hoped to establish a new Confederacy.

En route, the Cabinet disbanded, taking payment from the gold of the Treasury. With rumors spreading among the Southern troops of the defeat of the Confederacy, the Davises were in hourly anticipation of attack by marauding Confederate soldiers in search of treasure. When the Union soldiers charged their camp, Jefferson Davis mistook them at first for the expected marauders. 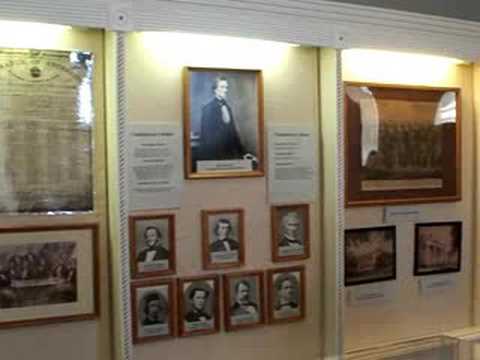