Description: Maj. Gen. James H. Wilson, commanding three divisions of Union cavalry, about 13,500 men, led his men south from Gravelly Springs, Alabama, on March 22, 1865. Opposed by Confederate Lt. Gen. Nathan B. Forrest, Wilson skillfully continued his march and eventually defeated him in a running battle at Ebenezer Church, on April 1. Continuing towards Selma, Wilson split his command into three columns. Although Selma was well-defended, the Union columns broke through the defenses at separate points forcing the Confederates to surrender the city, although many of the officers and men, including Forrest and Lt. Gen. Richard Taylor, escaped. Selma demonstrated that even Forrest, whom some had considered invincible, could not stop the unrelenting Union movements deep into the Southern Heartland.

The Battle of Selma, a battle during the American Civil War, was fought in Selma, Alabama, on April 2, 1865. The U.S. Army forces under Major General James H. Wilson defeated a Confederate Army force under Lieutenant General Nathan Bedford Forrest.

Wilson, commanding three divisions of Union cavalry, consisting of 13,500 men, led them south from Gravelly Springs, Alabama, on March 22, 1865. Opposed by Confederate Lt. Gen. Nathan B. Forrest, Wilson skillfully continued his march and eventually defeated him in a running battle at Ebenezer Church, on April 1, 1865. Continuing towards Selma, Wilson split his command into three columns. Although Selma was well-defended, the Union columns broke through the defenses at separate points forcing the Confederates to surrender the city, although many of the officers and men, including Forrest and Lt. Gen. Richard Taylor, escaped. Selma demonstrated that even Forrest, whom some had considered invincible, could not stop the unrelenting Union movements deep into the Southern Heartland.

On March 30, 1865, General Wilson detached Brig. Gen. John T. Croxton's brigade to destroy all Confederate property at Tuscaloosa, Alabama. After capturing a Confederate courier who carried dispatches from Forrest describing the strengths and dispositions of his scattered forces, Wilson also sent a brigade to destroy the bridge across the Cahaba River at Centreville. This action effectively cut off most of Forrest's reinforcements. This began a running fight that did not end until after the fall of Selma.

On the afternoon of April 1, after skirmishing all morning, Wilson's advanced guard ran into Forrest's line of battle at Ebenezer Church, where the Randolph Road intersected the main Selma road. Here Forrest had hoped to bring his entire force to bear on Wilson. However delays caused by flooding plus earlier contact with the enemy enabled Forrest to muster less than 2,000 men, a large number of whom were not veterans but militia consisting of old men and young boys.

The outnumbered and outgunned Confederates fought bravely for more than an hour as more Union cavalry and artillery deployed on the field. Forrest himself was wounded by a saber-wielding Union captain whom he killed with his revolver. Finally, a Union cavalry charge with carbines blazing broke the Confederate militia causing Forrest to be flanked on his right. He was forced to retreat under severe pressure.

Early the next morning Forrest arrived at Selma, "horse and rider covered in blood." He advised Gen. Richard Taylor, departmental commander, to leave the city. Taylor did so after giving Forrest command of the defense.

Selma was protected by three miles of fortifications which ran in a semi-circle around the city. They were anchored on the north and south by the Alabama River. The works had been built two years earlier, and while neglected for the most part since, were still formidable. They were 8 to 12 feet high, 15 feet thick at the base, with a ditch 4 feet wide and 5 feet deep along the front. In front of this was a picket fence of heavy posts planted in the ground, 5 feet high, and sharpened at the top. At prominent positions, earthen forts were built with artillery in position to cover the ground over which an assault would have to be made.

Forrest's defenders consisted of his Tennessee escort company, McCullough's Missouri Regiment, Crossland's Kentucky Brigade, Roddey's Alabama Brigade, Frank Armstrong's Mississippi Brigade, General Daniel W. Adams' state reserves, and the citizens of Selma who were "volunteered" to man the works. Altogether this force numbered less than 4,000, only half of who were dependable. The Selma fortifications were built to be defended by 20,000 men. Forrest's soldiers had to stand 10 to 12 feet apart in the works.

Wilson's force arrived in front of the Selma fortifications at 2 p.m. He had placed Gen. Eli Long's division across the Summerfield Road with the Chicago Board of Trade Battery in support. He had Maj. Gen. Emory Upton's division placed across the Range Line Road with Battery I, 4th U.S. Artillery in support. Altogether, Wilson had 9,000 troops available for the assault.

The Federal commander's plan was for Upton to send in a 300-man detachment after dark to cross the swamp on the Confederate right, enter the works, and begin a flanking movement toward the center moving along the line of fortifications. Then, a single gun from Upton's artillery would signal the attack by the entire Federal Corps.

At 5 p.m., however, Gen. Armisted Long's ammunition train in the rear was attacked by advance elements of Forrest's scattered forces coming toward Selma. Both Long and Upton had positioned significant numbers of troops in their rear for just such an event. However, Long decided to commence his assault against the Selma fortifications to neutralize the enemy attack in his rear.

Long's troops attacked in a single rank in three main lines, dismounted with Spencers carbines , supported by their own artillery fire. The Confederates replied with heavy small arms and artillery fire of their own. The Southern artillery, in one of the many ironies of the Civil War, only had solid shot on hand, while just a short distance away was an arsenal which produced tons of canister, a highly effective anti-personnel ammunition.

The Federals suffered many casualties (including General Long himself) but not enough to break up the attack. Once the Union troops reached the works, there was vicious hand-to-hand fighting. Many soldiers were struck down with clubbed muskets. But the Union troops kept charging into the works. In less than 30 minutes, Long's men had captured the works protecting the Summerfield Road.

Meanwhile, General Upton, observing Long's success, ordered his division forward. The story was much the same for his men as on Long's front. Soon, U.S. flags could be seen waving over the works from Range Line Road to Summerfield Road.

After the outer works fell, General Wilson himself led the 4th U.S. Cavalry Regiment in a mounted charge down the Range Line Road toward the unfinished inner line of works. The retreating Confederate forces, upon reaching the inner works, all rallied and poured a devastating fire into the charging Union column. This broke up the charge and sent General Wilson sprawling to the ground when his favorite horse was wounded. He quickly remounted his stricken mount and ordered a dismounted assault by several regiments.

Mixed units of Confederate troops had also occupied the Selma railroad depot and the adjoining banks of the railroad bed to make a stand next to the Plantersville Road (present day Broad Street). The fighting there was heavy, but by 7 p.m., the superior numbers of Union troops had managed to flank the Southern positions causing them to abandon the depot as well as the inner line of works.

In the darkness, the Union troops rounded up hundreds of prisoners, but hundreds more escaped down the Burnsville Road, including Generals Forrest, Armstrong, and Roddey. To the west, many Confederate soldiers fought the pursuing Union soldiers all the way down to the eastern side of Valley Creek. They escaped in the darkness by swimming across the Alabama River near the mouth of Valley Creek (where the present day Battle of Selma Reenactment is held.)

The jubilant Union troops looted the city that night while many businesses and private residences were burned. They spent the next week destroying the arsenal and naval foundry. Then they left Selma heading to Montgomery and then Columbus and Macon, Georgia, and the end of the war. 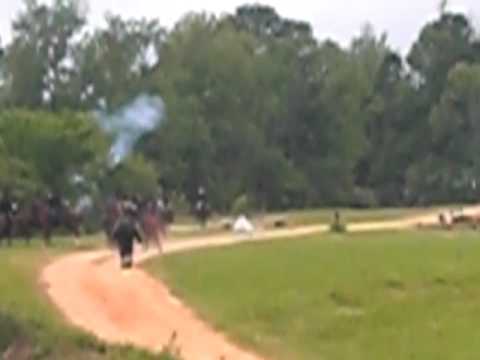 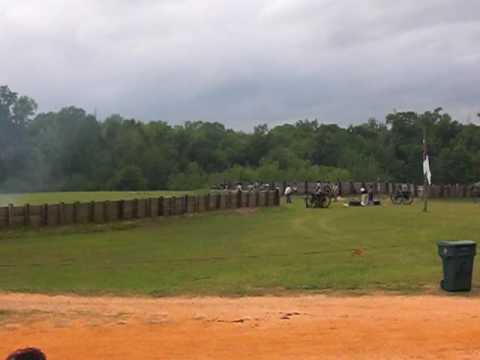 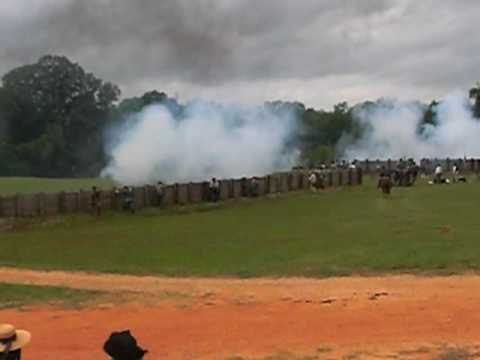 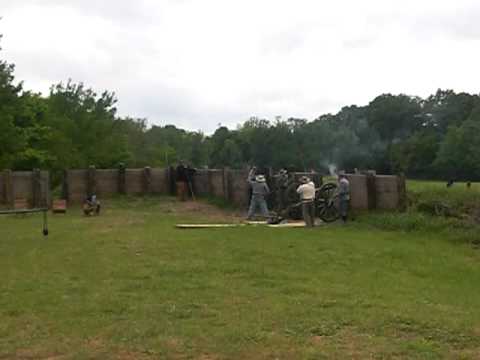 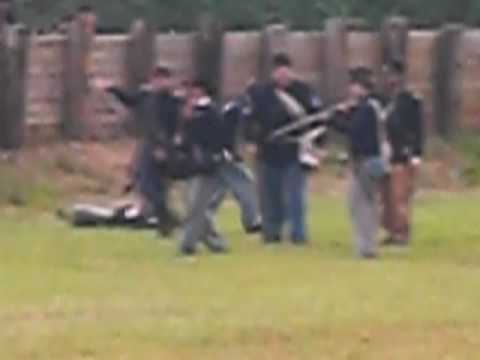 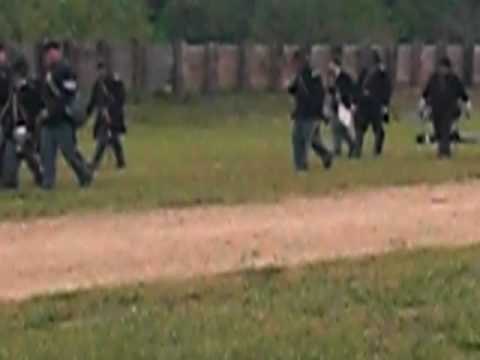