Description: While Slocum’s advance was stalled at Averasborough by Hardee’s troops, the right wing of Sherman’s army under command of Maj.

Gen. O.O. Howard marched toward Goldsborough. On March 19, Slocum encountered the entrenched Confederates of Gen. Joseph E. Johnston who had concentrated to meet his advance at Bentonville. Late afternoon, Johnston attacked, crushing the line of the XIV Corps. Only strong counterattacks and desperate fighting south of the Goldsborough Road blunted the Confederate offensive. Elements of the XX Corps were thrown into the action as they arrived on the field. Five Confederate attacks failed to dislodge the Federal defenders and darkness ended the first day’s fighting. During the night, Johnston contracted his line into a “V” to protect his flanks with Mill Creek to his rear. On March 20, Slocum was heavily reinforced, but fighting was sporadic. Sherman was inclined to let Johnston retreat. On the 21st, however, Johnston remained in position while he removed his wounded. Skirmishing heated up along the entire front. In the afternoon, Maj. Gen. Joseph Mower led his Union division along a narrow trace that carried it across Mill Creek into Johnston’s rear. Confederate counterattacks stopped Mower’s advance, saving the army’s only line of communication and retreat. Mower withdrew, ending fighting for the day. During the night, Johnston retreated across the bridge at Bentonville. Union forces pursued at first light, driving back Wheeler’s rearguard and saving the bridge. Federal pursuit was halted at Hannah’s Creek after a severe skirmish. Sherman, after regrouping at Goldsborough, pursued Johnston toward Raleigh. On April 18, Johnston signed an armistice with Sherman at the Bennett House, and on April 26, formally surrendered his army.

The Battle of Bentonville was fought March 19–21, 1865, in Bentonville, North Carolina, near the current town of Four Oaks, as part of the Carolinas Campaign of the American Civil War. It was the last major battle to occur between the armies of Maj. Gen. William T. Sherman and Gen. Joseph E. Johnston.

On the first day of the battle, the Confederate army attacked one Federal wing and was able to rout two Union divisions, but was unable to drive the rest of the wing off the field. The next day, the other Federal wing arrived and for the next two days, the armies skirmished with each other before Johnston retreated. In light of overwhelming enemy strength and the relatively heavy casualties his army suffered in the battle, Johnston surrendered to Sherman little more than a month later at Bennett Place, near Durham Station. Coupled with Gen. Robert E. Lee's surrender earlier in April, Johnston's surrender represented the effective end of the war.

During the late winter and early spring of 1865, Sherman's Union army cut a swath of destruction through South Carolina, a logical continuation of the previous fall's March to the Sea. Sherman intended to cut Confederate supply lines to Petersburg and damage Confederate morale. On March 8, Union soldiers crossed into North Carolina as a collection of Confederate units attempted to concentrate and block their path. Sherman divided his command into two parts, a Left Wing commanded by Maj. Gen.Henry W. Slocum and a Right Wing commanded by Maj. Gen. Oliver O. Howard. The two wings marched separately toward Goldsboro beginning on March 13, with no one in the Union officer command expecting major resistance from Johnston.

On February 23, Confederate general-in-chief Robert E. Lee ordered Johnston to take command of the Army of Tennessee and units in the Carolinas, Georgia, and Florida, and to "concentrate all available forces and drive back Sherman."Johnston mananged to concentrate in North Carolina the Army of Tennessee commanded by Lt. Gen. A.P. Stewart, Maj. Gen. Robert Hoke's division from the Army of Northern Virginia[9], troops from the Department of South Carolina, Georgia, and Florida commanded by Lt. Gen. William Hardee, and cavalry under the command of Lt. Gen. Wade Hampton, calling the united force the Army of the South. Confederate maps erroneously showed that the two Union wings were twelve miles apart, which meant each would take a day to reach the other. Johnston attempted to concentrate his entire army on Slocum's wing to defeat it and to destroy its trains before it reunited with the rest of the Union column. The Confederate attack commenced on March 19, as Slocum's men marched on the Goldsboro Road, one mile (1.6 km) south of Bentonville.

Slocum was convinced he faced only enemy cavalry and artillery, not an entire army. In addition, Sherman did not believe that Johnston would fight with the Neuse River to his rear. Therefore, Slocum initially notified Sherman that he was facing only cursory resistance near Bentonville and did not require aid. Believing he faced only cavalry, Slocum attempted to brush aside the Confederates by attacking with the division of William P. Carlin with support from the division of Absalom Baird, both from the XIV Corps but this attack was driven back. Slocum then deployed these division in a defensive line, with James D. Morgan's division on the right and a XX Corps division in support, in order to delay the Confederates long enough to allow the rest of his wing to arrive. None of these divisions constructed strong breastworks except for Morgan's divison. In addition, there was a gap in the center of the Union line.

". . . it looked like a picture and at our distance was truly beautiful . . . But it was a painful sight to see how close their battle flags were together, regiments being scarcely larger than companies and a division not much larger than a regiment should be."
—Col. Charles W. Broadfoot, 1st North Carolina Junior Reserves, describing the attack by the Army of Tennessee.

At 3 o'clock in the afternoon, Confederate infantry launched their attack and drove the Union left flank back in confusion.[18] Confederates under Maj. Gen. D.H. Hill filled the vacuum left by the retreating Federals and began enfilading the Union troops remaining along the front. At one point Morgan's division was nearly surrounded and was being attacked from three sides, but the Confederate attacks were uncoordinated. Other units under Hardee attacked the prepared Union positions near the Harper house but were repulsed after multiple assaults. After a heated engagement, Union reinforcements arrived and checked Hill's assault. Fighting continued after nightfall as the Confederates tried without success to drive back the remaining Union line. About midnight, the Confederates withdrew to their original positions and started entrenching.

Slocum had called for aid from Sherman during the afternoon attacks, and Howard's wing arrived on the field late on the afternoon of March 20, deploying on Slocum's right flank and extending the Union line towards Mill Creek. Johnston responded to Howard's arrival by pulling back Hoke's division so it ran at a right angle to Stewart's left flank, and deploying one of Hardee's divsions on Hoke's left. Confederate cavalry protected the Confederate flank to Mill Creek in a weak skirmish line. Only light skirmishing occurred on this day. Johnston remained on the field, claiming that he stayed to remove his wounded, but perhaps also in hope of enticing Sherman to attack again, as had happened at Kennesaw Mountain.

On March 21, Union Maj. Gen. Joseph A. Mower, commanding the division on the Union right flank, requested permission from his corps commander to launch a "little reconnaissance" to his front, which was granted. Mower instead launched an attack with two brigades on the Confederate left flank, which was defending Mill Creek Bridge. Mower's men managed to come within one mile (1.6 km) of the crossing before Sherman peremptorily ordered them to pull back. In his memoirs, Sherman admitted that this was a mistake and that he missed an opportunity to end the campaign then and there, perhaps capturing Johnston's army entirely. Among the Confederate casualties was Lt. Gen. William J. Hardee's 16-year-old son, Willie. Hardee had reluctantly allowed his son to attach himself to the 8th Texas Cavalry just hours before Mower's attack.

During the night of the 21st to dawn on the 22nd, Johnston withdrew his army across Mill Creek and burned the bridge behind him, leaving behind a cavalry detachment as a rearguard. The Union army failed to detect the Confederate retreat until it was over. Sherman took little notice and did not pursue the Confederates, but continued his march to Goldsboro, where joined the Union forces under Terry and Schofield. The Confederate army had failed in its last chance to achieve a decisive victory over the Union army in North Carolina.

I can do no more than annoy him. I respectfully suggest that it is no longer a question whether you leave present position; you have only to decide where to meet Sherman. I will be near him.
—Joseph Johnston to Robert E. Lee

Sherman was criticized after the war for not attacking and capturing most, if not all, of Johnston's army when he had the chance. This might have shortened the war by several weeks. Others suggest that he knew that the war was rapidly drawing to a close, and that any further bloodshed at that point was pointless. Once he joined with the Union forces at Goldsboro, he would vastly outnumber Johnston and would be able to "lever Johnston easily from any position he chose. North Carolina, indeed Virginia, would be his."

[edit] Battlefield today
The Harper House, built in the 1850s, served as a Union field hospital during the battle and is located adjacent to the Bentonville Battlefield museum, which offers tours of its interior.

The site of the battle is preserved as the Bentonville Battleground State Historic Site, which was declared a National Historic Landmark in 1996. The park, founded in 1965, includes 130 acres of the battlefield and runs a visitor's center adjacent to the restored Harper House, which served as a hospital for Union soldiers during the battle.The Bentonville Battlefield Historical Association and the Civil War Preservation Trust also owns portions of the battlefield not included in the state park, including 901 acres by the CWPT alone.[ 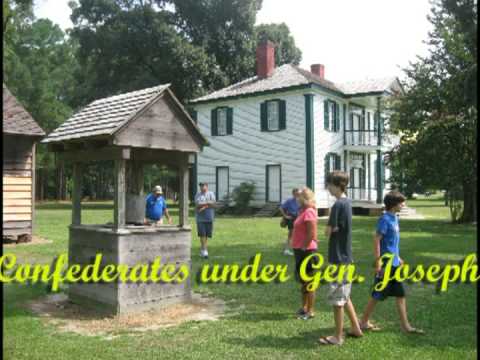 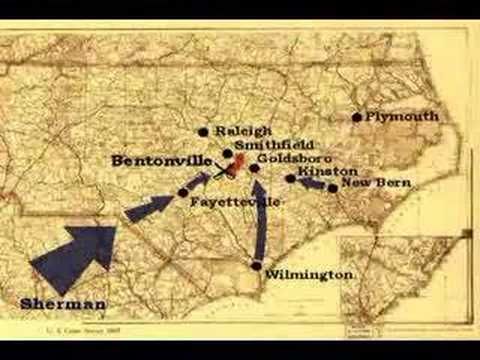