The Battle of Lovejoy's Station was fought on August 20, 1864, near what is now Lovejoy, Georgia, in Clayton County, during the Atlanta Campaign of the American Civil War.

The two sides had arrived at something of a stalemate, with the Union army half-encircling Atlanta and the Confederate defenders staying behind their fortifications.

The National Park Service considers the August 20 action to be a battle, but there were three other smaller actions at Lovejoy in 1864: Brig. Gen. Edward M. McCook's cavalry raid of July 29 and July 30, the September 2 to September 6 action, and the November 16 cavalry action. Historical archeology is currently underway to document unexplored portions of the battlefield that exist along Jonesboro Road, east of U.S. Highway 41.

The area of this historic battle has mostly been lost due to suburban sprawl of Clayton and Henry Counties, Georgia. The last 100 acres (0.40 km2) on the Henry County side are the site of a battle of another kind. Local citizens, preservationists, and historians are fighting to stop the development of this rural farmland. The local community has offered to buy back the land to develop a historic park to commemorate the Civil War battle.

Henry County, Georgia announced the official opening of the Nash Farm Battlefield Park, which was the scene of Kilpatrick's Raid on August 20 and the action from September 2 to September 6, 1864. Plans for the 202-acre (0.82 km2) battlefield include converting the farmhouse into a museum and renovating the barn into a public meetings and event facility, as well as walking trails throughout the property.

A summary report of history and archeology of the Nash Farm battlefield was completed in August 2007. On March 12, 2008, Lovejoy Station was placed for the second time on the Civil War Preservation Trust's List of Most Endangered Civil War Battlefields.

Description: While Confederate Maj. Gen. Joseph Wheeler was absent raiding Union supply lines from North Georgia to East Tennessee, Maj. Gen. William Sherman, unconcerned, sent Judson Kilpatrick to raid Rebel supply lines. Leaving on August 18, Kilpatrick hit the Atlanta & West Point Railroad that evening, tearing up a small area of tracks. Next, Kilpatrick headed for Lovejoy’s Station on the Macon & Western Railroad. In transit, on the 19th, Kilpatrick’s men hit the Jonesborough supply depot on the Macon & Western Railroad, burning great amounts of supplies. On the 20th, they reached Lovejoy’s Station and began their destruction. Rebel infantry (Cleburne’s Division) appeared and the raiders were forced to fight into the night, finally fleeing to prevent encirclement. Although Kilpatrick had destroyed supplies and track at Lovejoy’s Station, the railroad line was back in operation in two days. 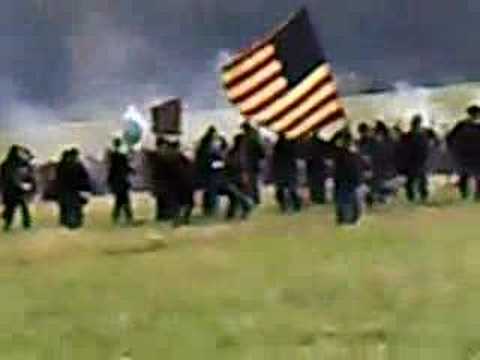