The Great Sheffield Flood, also known as the Great Inundation, was a flood that devastated parts of Sheffield, England, on 11 March 1864, when the Dale Dyke Dam broke.

The newly-built dam, at Low Bradfield on the River Loxley, broke while it was being filled for the first time. An estimated 3 million m³ (700 million imperial gallons) of water swept down the Loxley Valley, through Loxley village and on to Malin Bridge and Hillsborough, where the River Loxley joins the River Don. The flood continued south down the Don into Sheffield centre, around the eastward bend of the Don at Lady's Bridge, then to Attercliffe, past the sites of today's Don Valley Stadium, Sheffield Arena and Meadowhall Shopping Centre and on to Rotherham.

The subsequent enquiry found that the flood had wrecked nearly every bridge as far as Lady’s Bridge, destroyed 800 houses, and killed 270 people - bodies were later found as far down the Don as Mexborough. The conclusion was that the dam construction was defective, and that a small leak in the wall grew rapidly until the dam failed completely.

The claims for damages formed one of the largest insurance claims of the Victorian period.

On Friday last, shortly before midnight, Sheffield was suddenly swept by an inundation similar in its origin, but more destructive in its effects, than the great Holmfirth flood of Feb. 5, 1852, by which, it will be remembered, ninety persons lost their lives, property to the extent of from £500,000 to £800,000 was laid waste, and 7000 workpeople were thrown out of employment. In that case the calamity was occasioned by the giving way, after a continuous wet season, of the banks of the Bilbury reservoir, from which the town of Huddersfield drew its supplies of water.

In the present instance, the Bradfield reservoir of the Sheffield Water Company, situated between five and six miles from the town, and at several hundred feet above it, burst the embankment by which it was confined, and, rushing with terrific force down the narrow gorge formed by the Stannington and Loxley hills, carried away everything before it for four or five miles, submerged many of the low-level streets of Sheffield, and destroyed in a few minutes between two and three hundred lives, and an amount of property of which it is difficult at present to form even an approximate estimate.

'Individual experiences were infinitely tragic, pathetic, and sometimes bizarre. The first to drown was a two-day-old baby boy, the oldest a woman of eighty-seven. Whole families were wiped out; one desperate man, trapped upstairs in a terrace house, battered his way through five party walls to safety collecting thirty-four other people as he went; a would be suicide, locked in a cell, decided, as the flood poured in, that he no longer wished to die; one poor old man drowned alongside his sleeping companion - a donkey; a husband put his wife and five children on a bed on which they floated until the water went down.'

After about thirty minutes the flood gradually subsided leaving a trail of destruction more than eight miles long: it was later described as 'looking like a battlefield'. In addition to the massive loss of life; total or partial destruction occurred to 415 dwelling houses, 106 factories/shops, 64 other buildings, 20 bridges and 4478 cottage/market gardens. Despite being one of the biggest man-made disasters in British history, and now being annually recorded in the Guinness Book of Records, few people today - even in Sheffield - know a deal, if anything at all, about the flood. 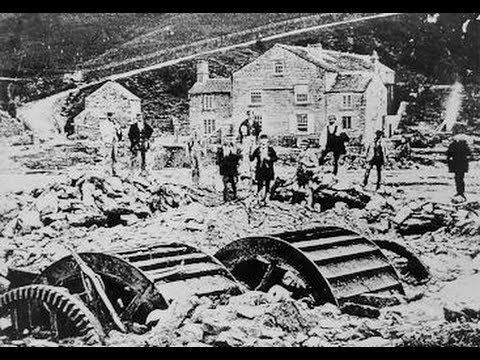