After Union victories at Gettysburg, Vicksburg, and Chattanooga in 1863, overall victory seemed at hand, and Lincoln promoted Ulysses S. Grant General-in-Chief on March 12, 1864.

When the spring campaigns turned into bloody stalemates, Lincoln supported Grant's strategy of wearing down Lee's Confederate army at the cost of heavy Union casualties. With an election looming, he easily defeated efforts to deny his renomination. At the Convention, the Republican Party selected Andrew Johnson, a War Democrat from the Southern state of Tennessee, as his running mate in order to form a broader coalition. They ran on the new Union Party ticket uniting Republicans and War Democrats.

The only known photographs of Lincoln giving a speech were taken as he delivered his second inaugural address. Here, he stands in the center, with papers in his hand.
Nevertheless, Republicans across the country feared that Lincoln would be defeated. Acknowledging this fear, Lincoln wrote and signed a pledge that, if he should lose the election, he would still defeat the Confederacy before turning over the White House:

“This morning, as for some days past, it seems exceedingly probable that this Administration will not be re-elected. Then it will be my duty to so co-operate with the President elect, as to save the Union between the election and the inauguration; as he will have secured his election on such ground that he cannot possibly save it afterwards."

Lincoln did not show the pledge to his cabinet, but asked them to sign the sealed envelope. While the Democratic platform followed the Peace wing of the party and called the war a "failure," their candidate, General George B. McClellan, supported the war and repudiated the platform.

Lincoln provided Grant with new replacements and mobilized his party to support Grant and win local support for the war effort. Sherman's capture of Atlanta in September ended defeatist jitters; the Democratic Party was deeply split, with some leaders and most soldiers openly for Lincoln; the Union party was united and energized, and Lincoln was easily reelected in a landslide. He won all but three states.[49]
On March 4, 1865, Lincoln delivered his second inaugural address, his favorite of all his speeches. At this time, a victory over the rebels was at hand, slavery was dead, and Lincoln was looking to the future.

The presidential election of 1864 was one of the most important in American history. It was, first of all, remarkable that it even occurred. It took place in the Union states during a bloody civil war, with no precedent for voting in a divided nation, and with seemingly ample justification for postponement. The spirited yet orderly process of the 1864 elections, with relatively little corruption and negligible violence, became a sterling example and vindication of the democratic process itself. Furthermore, it was an election in which voters cast ballots to determine crucial questions about the direction of the war, the government, and the society. Should the war be sustained or a settlement sought? What role would blacks play in the war and in a post-war society? Those and similar questions raised some of the most fundamental issues to be considered since the founding of the republic. 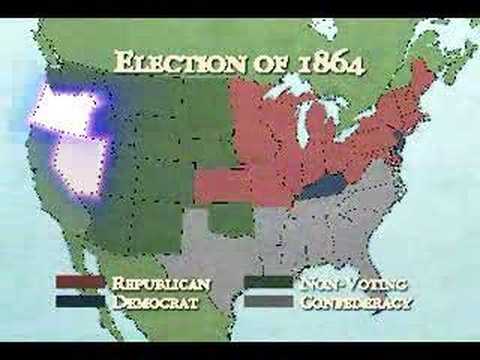