The Battle of Hartsville was fought on December 7, 1862, in northern Tennessee at the opening of the Stones River Campaign the American Civil War.

The Stones River Campaign started in early November 1862 when Union General William S. Rosecrans moved his Army of the Cumberland southeast from Nashville, Tennessee, toward Murfreesboro. Confederate General Braxton Bragg, commanding the Army of Tennessee, had retreated there after his defeat at the Battle of Perryville. Bragg ordered Colonel John Hunt Morgan to move north with his cavalry and operate along Rosecrans's lines of communications, to prevent him from foraging for supplies north of Nashville. The action at Hartsville, a crossing point on the Cumberland River about 40 miles upstream from Nashville, north of Murfreesboro, was an incident in Morgan's raid to the north, before Rosecrans had the bulk of his infantry forces on the move.

Guarding the river crossing at Hartsville was the 39th Brigade, XIV Corps, Army of the Cumberland, consisting of the 106th Ohio Infantry, the 108th Ohio, the 104th Illinois, and the 2nd Indiana Cavalry. The brigade was commanded by Col. Absalom B. Moore. Under the cover of darkness, Morgan crossed the river in the early morning of December 7, 1862, with about 1,400 men, mainly Kentuckians, outnumbered by about 1,000 troops to the Union brigade. Another Union force, three times that size, was encamped 9 miles away at Castalian Springs, close enough to hear the guns, but too far away to interfere.
Morgan's attack took the Union camp by surprise. One account from a participant indicates that the Confederates were able to get past the picket line by wearing blue uniforms, another that they wore civilian clothes and posed as refugees. The attack began at 6:45 a.m. with a simultaneous artillery bombardment and an infantry attack, while cavalry struck the flanks and rear. One of Moore’s units ran after an hour, which caused confusion and helped to force the Federals to fall back. By 8:30 a.m., the Confederates had surrounded the Federals, convincing Col. Moore to surrender.
Morgan inflicted 58 Union casualties, at the cost of 149 Confederate, however he also left the battlefield with 1,844 Union prisoners and a wagon train heavily loaded with captured equipment and supplies. General Joseph E. Johnston, who was in overall command of Confederate forces in the Western Theater, called this a "brilliant feat" and recommended that Morgan be appointed brigadier general immediately. Jefferson Davis happened to be in the vicinity at Murfreesboro and promoted Morgan in person when he arrived.

Description: The 39th Brigade, XIV Army Corps, was guarding the Cumberland River crossing at Hartsville to prevent Confederate cavalry from raiding. Under the cover of darkness, Brig. Gen. John H. Morgan crossed the river in the early morning of December 7, 1862. Col. Absalom B. Moore, commander of the 39th Brigade, stated in his after action report, that Morgan’s advance had worn Union blue uniforms which got them through the videttes. Morgan approached the Union camp, the pickets sounded the alarm, and held the Rebels until the brigade was in battle line. The fighting commenced at 6:45 am and continued until about 8:30 am. One of Moore’s units ran, which caused confusion and helped to force the Federals to fall back. By 8:30 am, the Confederates had surrounded the Federals, convincing them to surrender. This action at Hartsville, located north of Murfreesboro, was a preliminary to the Confederate cavalry raids by Forrest into West Tennessee, December 1862–January 1863, and Morgan into Kentucky, December 1862–January 1863. 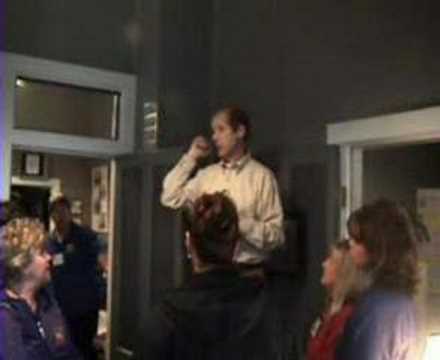