The mystic chords of memory . . . will yet swell the chorus of the Union, when again touched, as surely they will be, by the better angels of our nature.”

At his inauguration on March 4, 1861, the German American Turners formed Lincoln's bodyguard; and a sizable garrison of federal troops was also present, ready to protect the capital from Confederate invasion and local insurrection. In his first inaugural address, Lincoln declared, "I hold that in contemplation of universal law and of the Constitution the Union of these States is perpetual. Perpetuity is implied, if not expressed, in the fundamental law of all national governments," arguing further that the purpose of the United States Constitution was "to form a more perfect union" than the Articles of Confederation which were explicitly perpetual, thus the Constitution too was perpetual.

He asked rhetorically that even were the Constitution a simple contract, would it not require the agreement of all parties to rescind it? Also in his inaugural address, in a final attempt to reunite the states and prevent the looming war, Lincoln supported the pending Corwin Amendment to the Constitution, which had already passed Congress. This amendment, which explicitly protected slavery in those states in which it already existed, had more appeal to the critical border states than to the states that had already declared their separation. By the time Lincoln took office, the Confederacy was an established fact, and no leaders of the insurrection proposed rejoining the Union on any terms.

No compromise was found because a compromise was deemed virtually impossible. Buchanan might have allowed the southern states to secede, and some Republicans recommended that. However, conservative Democratic nationalists, such as Jeremiah S. Black, Joseph Holt, and Edwin M. Stanton had taken control of Buchanan's cabinet around January 1, 1861, and refused to accept secession. Lincoln and nearly every Republican leader adopted this position by March 1861: the Union could not be dismantled. Believing that a peaceful solution was still possible, Lincoln decided to not take any action against the South unless the Unionists themselves were attacked first. This finally happened in April 1861.

Historian Allan Nevins argues that Lincoln made three miscalculations in believing that he could preserve the Union, hold government property, and still avoid war. He "temporarily underrated the gravity of the crisis", overestimated the strength of Unionist sentiment in the South and border states, and misunderstood the conditional support of Unionists in the border states. In connection with Nevins' conclusions, it is interesting to note an incident from this period reported in the memoirs of William Tecumseh Sherman. Then a civilian, Sherman visited Lincoln in the White House during inauguration week, with his brother, Ohio Republican John Sherman. This meeting left the future General Sherman "sadly disappointed" at Lincoln's seeming failure to realize that "the country was sleeping on a volcano" and the South was "preparing for war."

Monday, March 4, 1861, was a big day for Abraham Lincoln and for America. That morning, he and outgoing President James Buchanan left the Willard Hotel, which is nearby the White House, in a horse-drawn carriage bound for the Capitol. Shortly after 1 p.m., Chief Justice of the Supreme Court Roger B. Taney administered the presidential oath of office.

With the swearing of his official vows, Lincoln became the 16th president of the United States. His speech was a very important one because he would be speaking not only as the new president but also as the leader of a nation in crisis. Lincoln was well prepared. He had sought lots of help to deliver the right message in his inaugural address.

For guidance and inspiration while composing his inaugural address, Lincoln turned to historical documents. All of them were concerned with states' rights. Lincoln took office just months after seven Southern states had seceded from the Union and formed the Confederate States of America. The Confederacy opposed the new leader's policy against the expansion of slavery to new states and had exercised what they viewed as their right to secede.

Lincoln sent drafts of his speech to his closest political advisers for feedback. William H. Seward, the future secretary of state, contributed ideas to several of the final passages, including the famous conclusion, "The mystic chords of memory . . . will yet swell the chorus of the Union, when again touched, as surely they will be, by the better angels of our nature."

Lincoln's inaugural address was stirring. He appealed for the preservation of the Union. To retain his support in the North without further alienating the South, he called for compromise. He promised he would not initiate force to maintain the Union or interfere with slavery in the states in which it already existed. Soon after, Lincoln received word that Fort Sumter, located in Charleston harbor, South Carolina, would have to be resupplied.

The situation presented a problem, as tensions between the North and the South were very high. Resupplying the fort might inflame the situation because it was located in a slave-holding state.

Yet Lincoln, in his inaugural address, had promised that the Union would not give up control of federal territory, such as Fort Sumter. The fort was resupplied, and Lincoln refused to evacuate it. The Confederates attacked the fort on April 12, 1861. The Civil War had begun, and President Lincoln was thrust into the middle of one of this country's greatest crises. 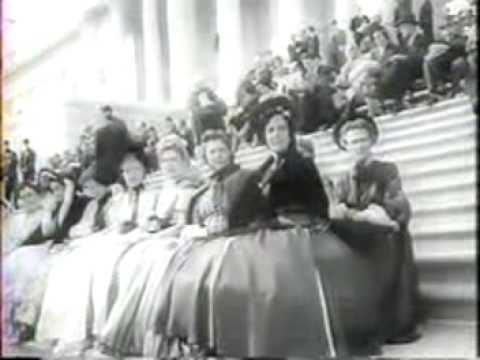