Late on the night of October 16, 1859, John Brown and twenty-one armed followers stole into the town of Harper's Ferry, Virginia (now West Virginia) as most of its residents slept.

The men--among them three free blacks, one freed slave, and one fugitive slave--hoped to spark a rebellion of freed slaves and to lead an "army of emancipation" to overturn the institution of slavery by force. To these ends the insurgents took some sixty prominent locals including Col. Lewis Washington (great-grand nephew of George Washington) as hostages and seized the town's United States arsenal and its rifle works.

The upper hand which nighttime surprise had afforded the raiders quickly eroded, and by the evening of October 17, the conspirators who were still alive were holed-up in an engine house. In order to be able to distinguish between insurgents and hostages, marines under Colonel Robert E. Lee waited for daylight on October 18 to storm the building.

John Brown (May 9, 1800 – December 2, 1859) was an American abolitionist who advocated and practiced armed insurrection as a means to end all slavery. He led the Pottawatomie Massacre in 1856 in Bleeding Kansas and made his name in the unsuccessful raid at Harpers Ferry in 1859.

President Abraham Lincoln said he was a "misguided fanatic" and Brown has been called "the most controversial of all 19th-century Americans." His attempt in 1859 to start a liberation movement among enslaved African Americans in Harpers Ferry, Virginia electrified the nation. He was tried for treason against the state of Virginia, the murder of five proslavery Southerners, and inciting a slave insurrection and was subsequently hanged. Southerners alleged that his rebellion was the tip of the abolitionist iceberg and represented the wishes of the Republican Party. Historians agree that the Harpers Ferry raid in 1859 escalated tensions that a year later led to secession and the American Civil War.

That a man might do something very audacious and desperate for money, power or fame, was to the general apprehension quite possible; but…that nineteen men could invade a great State to liberate a despised and hated race, was to the average intellect and conscience, too monstrous for belief.”

Brown’s plan was not to conduct a sudden raid and then escape to the mountains. Rather, his plan was to use those rifles and pikes he captured at the arsenal, in addition to those he brought along, to arm rebellious slaves with the aim of striking terror to the slaveholders in Virginia. He believed that on the first night of action two to five hundred black adherents would join his line. He ridiculed the militia and regular army that might oppose him. Then he would send agents to nearby plantations, rallying the slaves. He planned to hold Harpers Ferry for a short time, expecting that as many volunteers, white and black, would join him as would form against him. He then would make a rapid movement southward, sending out armed bands along the way. They would free more slaves, obtain food, horses and hostages, and destroy slaveholding morale. Brown planned to follow the Appalachian mountains south into Tennessee and even Alabama, the heart of the South, making forays into the plains on either side.

On Sunday night, October 16, 1859, Brown left three of his men behind as a rear-guard, including Owen Brown, his son, Meriem Coppoc and Frank Barclay, and led the rest into the town. Brown detached a party under John Cook to capture Colonel Lewis Washington, great grandnephew of George Washington at his nearby Beall-Air estate, some of his slaves, and two relics of George Washington: a sword presented to Washington by Frederick the Great and two pistols given by Lafayette, which Brown considered talismans. The party carried out its mission and returned via the Allstadt House, where they took more hostages. Brown's main party captured several watchmen and townspeople in Harpers Ferry.

Brown's men needed to capture the weapons and escape before word could be sent to Washington, D.C. The raid was going well for Brown's men. They cut the telegraph wire and seized a Baltimore & Ohio train passing through. An African-American baggage handler on the train named Hayward Shepherd, confronted the raiders and was subsequently shot and killed; ironically a freed slave became the first casualty of the raid. Then for unknown reasons, Brown let the train continue unimpeded. The train reached Washington the next day and the conductor alerted the authorities. One of the keys to success was the support of the local slave population. A massive uprising did not occur, and some histories of the raid[who?] have stated that the slaves never rebelled. Testimony given by Harpers Ferry residents[who?] during the federal investigation of Brown's raid indicated that no slaves rebelled. However, Osborne Perry Anderson, one of the few raiders to escape Harpers Ferry, contradicted these assertions in his memoir:

"Of the slaves who followed us to the Ferry, some were sent to help remove stores, and the others were drawn up in a circle around the engine-house, at one time, where they were, by Captain Brown's order, furnished by me with pikes, mostly, and acted as a guard to the prisoners to prevent their escape, which they did. As in the war of the American Revolution, the first blood shed was a black man's, Crispus Attuck's, so at Harpers Ferry, the first blood shed by our party, after the arrival of the United States troops, was that of a slave. In the beginning of the encounter, and before the troops had fairly emerged from the bridge, a slave was shot. I saw him fall. Phil, the slave who died in prison, with fear, as it was reported, was wounded at the Ferry, and died from the effects of it… The first report of the number of 'insurrectionists' killed was seventeen, which showed that several slaves were killed; for there were only ten of the men that belonged to the Kennedy Farm who lost their lives at the Ferry, namely: John Henri Kagi, Jerry Anderson, Watson Brown, Oliver Brown, Stewart Taylor, Adolphus Thompson, William Thompson, William Leeman, all eight whites, and Dangerfield Newby and Sherrard Lewis Leary, both colored. The rest reported dead, according to their own showing, were colored."

The townspeople soon began to fight back against the raiders. Nevertheless, Brown's men captured the armory that evening.

Armory workers discovered Brown's men early on the morning of October 17. Local militia, farmers and shopkeepers surrounded the armory. When a company of militia captured the bridge across the Potomac River, any route of escape was cut off. During the day four townspeople were killed, including the mayor. Realizing his escape was cut, Brown took 9 of his captives and moved into the smaller engine house, which would come to be known as John Brown's Fort. The raiders barred off the windows and doors and exchanged the occasional volley with the surrounding forces. At one point Brown sent out his son, Watson, and Aaron Dwight Stevens with a white flag, but Watson was mortally wounded and Stevens was shot and captured. The raid was rapidly deteriorating. One of the raiders named William H. Leeman panicked and tried to escape by swimming across the Potomac River. The townspeople, reportedly drunk, made sport of shooting up Leeman's body. During the intermittent shooting Brown's other son, Oliver was shot and died after a brief period.

By 3:30 that afternoon, President James Buchanan ordered a detachment of U.S. Marines to march on Harpers Ferry under the command of Brevet Colonel Robert E. Lee of the 2nd U.S. Cavalry. Lee was on leave from Texas visiting his family in nearby Arlington. Upon his arrival at Harpers Ferry, Lee first decided to close all the local saloons in an attempt to control the townpeople's drunken shooting.

Lee first offered the role of attacking the engine house to the local militia units on the spot. Both militia commanders declined and Lee turned to the Marines. On the morning of October 18, Col. Lee sent Lt. J.E.B. Stuart, serving as a volunteer aide-de-camp, under a flag of truce to negotiate a surrender of John Brown and his followers. Lee instructed Lt. Israel Greene that if Brown refused, he was to lead the marines in storming the engine house. Stuart told Brown that his men would be spared if they surrendered. Brown refused and Stuart signaled to Lt. Greene and his men. Two marines armed with sledgehammers tried in vain to break through the door. Greene found a wooden ladder and 10 marines used it as a battering ram to knock the front doors in. Greene was the first through the door and with the assistance of Lewis Washington identified and singled out John Brown. Greene later recounted what happened next:

"Quicker than thought I brought my saber down with all my strength upon [Brown's] head. He was moving as the blow fell, and I suppose I did not strike him where I intended, for he received a deep saber cut in the back of the neck. He fell senseless on his side, then rolled over on his back. He had in his hand a short Sharpe's cavalry carabine. I think he had just fired as I reached Colonel Washington, for the marine who followed me into the aperture made by the ladder received a bullet in the abdomen, from which he died in a few minutes. The shot might have been fired by some one else in the insurgent party, but I think it was from Brown. Instinctively as Brown fell I gave him a saber thrust in the left breast. The sword I carried was a light uniform weapon, and, either not having a point or striking something hard in Brown's accouterments, did not penetrate. The blade bent double."

The action inside the engine house happened very quickly. In three minutes, all of the raiders still alive were taken prisoner and the action was over.

Robert E. Lee made a summary report of the events that took place at Harpers Ferry to Colonel Samuel Cooper, the U. S. Army Adjutant General. According to Lee's notes Lee believed John Brown was insane,"...the plan [raiding the Harpers Ferry Arsenal] was the attempt of a fanatic or mad­man". Lee also believed that the African Americans used in the raid were forced to by John Brown himself. "The blacks, whom he [John Brown] forced from their homes in this neighborhood, as far as I could learn, gave him no voluntary assistance." Lee attributed John Brown's "temporary success" by creating panic and confusion and by "magnifying" the number of participants involved in the raid.[8]

Colonel Lee and Lt. Greene searched the surrounding country for fugitives who had participated in the attack. John Brown was taken to the court house in nearby Charles Town for trial. He was found guilty of treason against the commonwealth of Virginia and was hanged on December 2. (This execution was witnessed by the actor John Wilkes Booth, who would later assassinate President Abraham Lincoln.) Four other raiders were executed on December 15 and two more on March 16, 1860. Colonel Robert E. Lee, J.E.B. Stuart and Israel Greene all became officers in the Confederate States Army during the following Civil War. 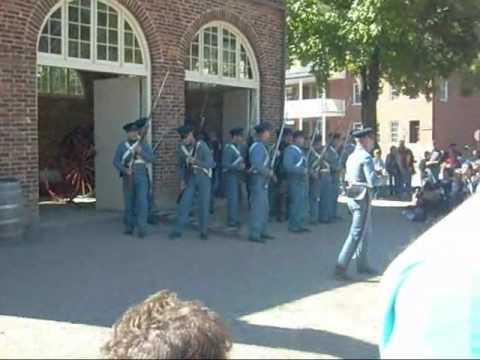 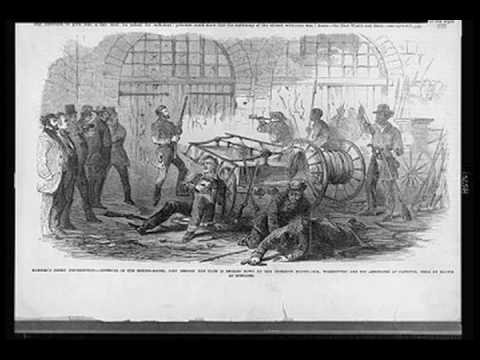