MR. DOUGLAS’ SPEECH. LADIES AND GENTLEMEN: I appear before you today in pursuance of a previous notice, and have made arrangements with Mr. Lincoln to divide time, and discuss with him the leading political topics that now agitate the country.

Prior to 1854 this country was divided into two great political parties known as Whig and Democratic. These parties differed from each other on certain questions which were then deemed to be important to the best interests of the Republic. Whig and Democrats differed about a bank, the tariff, distribution, the specie circular and the sub—treasury. On those issues we went before the country and discussed the principles, objects and measures of the two great parties. Each of the parties could proclaim its principles in Louisiana as well as in Massachusetts, in Kentucky as well as in Illinois. Since that period, a great revolution has taken place in the formation of parties, by which they now seem to be divided by a geographical line, a large party in the North being arrayed under the Abolition or Republican banner, in hostility to the Southern States, Southern people, and Southern institutions. It becomes important for us to inquire how this transformation of parties has occurred, made from those of national principles to geographical factions. You remember that in 1850—this country was agitated from its center to its circumference about this slavery question—it became necessary for the leaders of the great Whig party and the leaders of the great Democratic party to postpone, for the time being, their particular disputes, and unite first to save the Union before they should quarrel as to the mode in which it was to be governed. During the Congress of 1849—50, Henry Clay was the leader of the Union men, supported by Cass and Webster, and the leaders of the Democracy and the leaders of the Whigs, in opposition to Northern Abolitionists or Southern Disunionists. That great contest of 1850 resulted in the establishment of the Compromise Measures of that year, which measures rested on the great principle that the people of each State and each Territory of this Union ought to be permitted to regulate their own domestic institutions in their own way, subject to no other limitation than that which the Federal Constitution imposes.

I now wish to ask you whether that principle was right or wrong which guarantied to every State and every community the right to form and regulate their domestic institutions to suit themselves. These measures were adopted, as I have previously said, by the joint action of the Union Whigs and Union Democrats in opposition to Northern Abolitionists and Southern Disunionists. In 1858, when the Whig party assembled at Baltimore, in National Convention for the last time, they adopted the principle of the Compromise Measures of 1850 as their rule of party action in the future. One month thereafter the Democrats assembled at the same place to nominate a candidate for the Presidency, and declared the same great principle as the rule of action by which the Democracy would be governed. The Presidential election of 1852 was fought on that basis. It is true that the Whigs claimed special merit for the adoption of those measures, because they asserted that their great Clay originated them, their god—like Webster defended them and their Fillmore signed the bill making them the law of the land; but on the other hand, the Democrats claimed special credit for the Democracy, upon the ground that we gave twice as many votes in both Houses of Congress for the passage of these measures as the Whig party.

Mr. Lincoln was then introduced to the audience by D.L. Phillips, Esq., and was greeted with three cheers, and then "three more;" after which he said:

LADIES AND GENTLEMEN: There is very much in the principles that Judge Douglas has here enunciated that I most cordially approve, and over which I shall have no controversy with him. In so far as he has insisted that all the States have the right to do exactly as they please about all their domestic relations, including that of slavery, I agree entirely with him. He places me wrong in spite of all I can tell him, though I repeat it again and again, insisting that I have no difference with him upon this subject. I have made a great many speeches, some of which have been printed, and it will be utterly impossible for him to find any thing that I have ever put in print contrary to what I now say upon this subject. I hold myself under constitutional obligations to allow the people in all the States, without interference, direct or indirect, to do exactly as they please, and I deny that I have any inclination to interfere with them, even if there were no such constitutional obligation. I can only say again that I am placed improperly—altogether improperly, in spite of all I can say—when it is insisted that I entertain any other view or purposes in regard to that matter.

While I am upon this subject, I will make some answers briefly to certain propositions that Judge Douglas has put. He says, "Why can’t this Union endure permanently, half slave and half free?" I have said that I supposed it could not, and I will try, before this new audience, to give briefly some of the reasons for entertaining that opinion. Another form of his question is, "Why can’t we let it stand as our fathers placed it?" That is the exact difficulty between us. I say, that Judge Douglas and his friends have changed them from the position in which our fathers originally placed it. I say, in the way our fathers originally left the slavery question, the institution was in the course of ultimate extinction, and the public mind rested in the belief that it was in the course of ultimate extinction. I say when this Government was first established, it was the policy of its founders to prohibit the spread of slavery into the new Territories of the United States, where it had not existed. But Judge Douglas and his friends have broken up that policy, and placed it upon a new basis by which it is to become national and perpetual. All I have asked or desired any where is that it should be placed back again upon the basis that the fathers of our Government originally placed it upon. I have no doubt that it would become extinct, for all time to come, if we but readopted the policy of the fathers by restricting it to the limits it has already covered—restricting it from the new Territories.

"Then debaters and shorthand reporters dropped south 300 miles, to a point south of Richmond, Virginia. The Jonesboro crowd numbered about 1,400 — most of them rather cool about the great debate. The place was on land wedged between the Slaves States of Kentucky and Missouri; several carloads of passengers had come from those states to listen," wrote historian Carl Sandburg.

Lincoln chronicler George W. Smith wrote: "On the eve of the Jonesboro debate, September 14, 1858, David L. Phillips of Anna met Lincoln at Centralia to escort him to Anna. Phillips, the Republican candidate for Congress in the Ninth District, was Lincoln's host for the evening preceding his third debate with Senator Douglas. Lincoln was accompanied by Horace White, acting as both secretary for the state Republican committee and reporter for the Chicago Press and Tribune, and Robert R. Hitt, the stenographer who took down the debates. After dinner at the Phillips home, Lincoln and Phillips went to the Union House, one mile away in Jonesboro, where White and Hitt were staying, and spent an hour sitting on the front porch gazing heavenward at Donati's Comet. Fortunately for Lincoln, he returned to the Phillips home to spend the night. Nearly half a century later one reporter reminisced about 'the day of semi-starvation and the night with half a dozen roommates' at Jonesboro; everywhere in southern Illinois, he said, accommodations were 'simply abominable.'"

George W. Smith wrote: "Judson Phillips said while in Jonesboro Lincoln spent some time about the old courthouse and with the politicians at the Union Hotel. Mr. Phillips and Lincoln returned to the Phillips home in Anna for an early noon meal as the Douglas train was expected from Cairo before the noon hour. Horace White said he was at the Anna station when the Douglas train with its cannon arrived. There was not a large number on the train nor a very large crowd at the station. Senator Douglas and some friends found carriages waiting to convey them to the county seat at Jonesboro, one mile west, while the band, the cannon, and the citizens were expedited to form a procession and march to Jonesboro. There was some trouble in getting the band to lead the way. Professor Terpinitz, the director, told the author that the band boys were tired, hungry, and sleepy and it was not an easy task to get them to march in an orderly manner over to Jonesboro. Finally the band got in position and led the way followed by the cannon and a goodly number of citizens carrying flags and banners brought up from Cairo on the Douglas special." 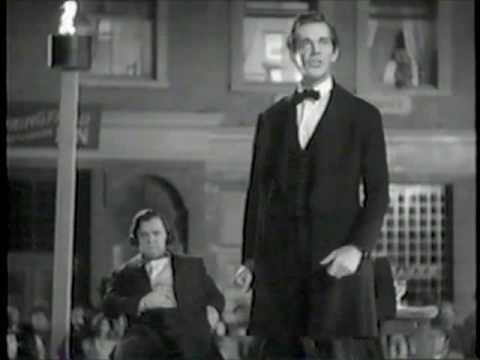