Douglas replied that settlers could circumvent the decision by not establishing the local police regulations—i.e., a slave code—that protected a master’s property. Without such protection, no one would bring slaves into a territory. This became known as the “Freeport Doctrine.”

Douglas’s position, while acceptable to many Northern Democrats, angered the South and led to the division of the last remaining national political institution, the Democratic Party. Although he retained his seat in the Senate, narrowly defeating Lincoln when the state legislature (which then elected U.S. senators) voted 54 to 46 in his favour, Douglas’s stature as a national leader of the Democratic Party was gravely diminished. Lincoln, on the other hand, lost the election but won acclaim as an eloquent spokesman for the Republican cause.

LADIES AND GENTLEMEN: On Saturday last, Judge Douglas and myself first met in public discussion. He spoke one hour, I an hour and a half, and he replied for half an hour. The order is now reversed. I am to speak an hour, he an hour and a half, and then I am to reply for half an hour. I propose to devote myself during the first hour to the scope of what was brought within the range of his half-hour speech at Ottawa. Of course there was brought within the scope in that half-hour's speech something of his own opening speech. In the course of that opening argument Judge Douglas proposed to me seven distinct interrogatories. In my speech of an hour and a half, I attended to some other parts of his speech, and incidentally, as I thought, answered one of the interrogatories then. I then distinctly intimated to him that I would answer the rest of his interrogatories on condition only that he should agree to answer as many for me. He made no intimation at the time of the proposition, nor did he in his reply allude at all to that suggestion of mine. I do him no injustice in saying that he occupied at least half of his reply in dealing with me as though I had refused to answer his interrogatories. I now propose that I will answer any of the interrogatories, upon condition that he will answer quest ions from me not exceeding the same number. I give him an opportunity to respond. The Judge remains silent. I now say that I will answer his interrogatories, whether he answers mine or not; and that after I have done so, I shall propound mine to him.

I have supposed myself, since the organization of the Republican party at Bloomington, in May, 1856, bound as a party man by the platforms of the party, then and since. If in any interrogatories which I shall answer I go beyond the scope of what is within these platforms, it will be perceived that no one is responsible but myself.

Having said thus much, I will take up the Judge's interrogatories as I find them printed in the Chicago Times, and answer them seriatim. In order that there may be no mistake about it, I have copied the interrogatories in writing, and also my answers to them. The first one of these interrogatories is in these words:

LADIES AND GENTLEMEN: The silence with which you have listened to Mr. Lincoln during his hour is creditable to this vast audience, composed of men of various political parties. Nothing is more honorable to any large mass of people assembled for the purpose of a fair discussion, than that kind and respectful attention that is yielded not only to your political friends, but to those who are opposed to you in politics.

I am glad that at last I have brought Mr. Lincoln to the conclusion that he had better define his position on certain political questions to which I called his attention at Ottawa. He there showed no disposition, no inclination, to answer them. I did not present idle questions for him to answer merely for my gratification. I laid the foundation for those interrogatories by showing that they constituted the platform of the party whose nominee he is for the Senate. I did not presume that I had the right to catechise him as I saw proper, unless I showed that his party, or a majority of it, stood upon the platform and were in favor of the propositions upon which my questions were based. I desired simply to know, inasmuch as he had been nominated as the first, last, and only choice of his party, whether he concurred in the platform which that party had adopted for its government. In a few moments I will proceed to review the answers which he has given to these interrogatories; but in order to relieve his anxiety I will first respond to these which he has presented to me. Mark you, he has not presented interrogatories which have ever received the sanction of the party with which I am acting, and hence he has no other foundation for them than his own curiosity. 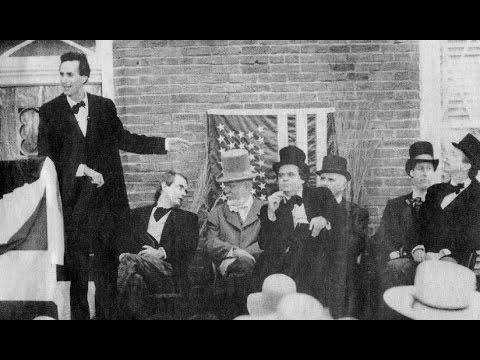