Phineas P. Gage (July 9, 1823 – May 21, 1860) was a railroad construction foreman now remembered for his incredible survival of an accident in which a large iron rod was driven completely through his head, destroying one or both of his brain's frontal lobes, and for that injury's reported effects on his personality and behavior — effects said to be so profound that friends saw him as "no longer Gage."

Long known as "the American crowbar case" — once termed "the case which more than all others is calculated to excite our wonder, impair the value of prognosis, and even to subvert our physiological doctrines" — Phineas Gage influenced 19th century thinking about the brain and the localization of its functions, and was perhaps the first case suggesting that damage to specific regions of the brain might affect personality and behavior.

Gage is a fixture in the curricula of neurology, psychology and related disciplines, and is frequently mentioned in books and academic papers; he also has a minor place in popular culture. Relative to this celebrity, the body of known fact about the case is remarkably small, so that historically it has been cited in support of mutually incompatible theories of the brain. A survey of accounts of the case has found that even modern scientific presentations are often exaggerated and distorted in significant ways, frequently contradicting the established facts.

On September 13, 1848, 25-year-old Gage was foreman of a work gang blasting rock while preparing the roadbed for the Rutland & Burlington Railroad outside the town of Cavendish, Vermont. After a hole was bored into a body of rock, one of Gage's duties was to add blasting powder, a fuse, and sand, then compact the charge into the hole using a large iron rod. Possibly because the sand was omitted, around 4:30 PM:

the powder exploded, carrying an instrument through his head an inch and a fourth in [diameter], and three feet and [seven] inches in length, which he was using at the time. The iron entered on the side of his face...passing back of the left eye, and out at the top of the head.

Nineteenth-century references to Gage as "the American Crowbar Case" may mislead some readers. For Americans of the time a crowbar did not have the bend or claw sometimes associated with that term today. Gage's tamping iron was simply a cylinder, "round and rendered comparatively smooth by use":

The end which entered first is pointed; the taper being [twelve] inches long...circumstances to which the patient perhaps owes his life. The iron is unlike any other, and was made by a neighbouring blacksmith to please the fancy of its owner.

Amazingly, Gage spoke within a few minutes, walked with little or no assistance, and sat upright in a cart for the 3/4-mile ride to his lodgings in town. The first physician to arrive was Dr. Edward H. Williams:

I first noticed the wound upon the head before I alighted from my carriage, the pulsations of the brain being very distinct. Mr. Gage, during the time I was examining this wound, was relating the manner in which he was injured to the bystanders. I did not believe Mr. Gage's statement at that time, but thought he was deceived. Mr. Gage persisted in saying that the bar went through his head....Mr. G. got up and vomited; the effort of vomiting pressed out about half a teacupful of the brain, which fell upon the floor.

Dr. John Martyn Harlow took charge of the case about an hour later:

You will excuse me for remarking here, that the picture presented was, to one unaccustomed to military surgery, truly terrific; but the patient bore his sufferings with the most heroic firmness. He recognized me at once, and said he hoped he was not much hurt. He seemed to be perfectly conscious, but was getting exhausted from the hemorrhage. Pulse 60, and regular. His person, and the bed on which he was laid, were literally one gore of blood.

Despite Harlow's skillful care, Gage's recuperation was long and difficult. Pressure on the brain left him semi-comatose from September 23 to October 3, "seldom speaking unless spoken to, and then answering only in monosyllables. The friends and attendants are in hourly expectancy of his death, and have his coffin and clothes in readiness."

But on October 7 Gage "succeeded in raising himself up, and took one step to his chair." One month later he was walking "up and down stairs, and about the house, into the piazza," and while Harlow was absent for a week, Gage was "in the street every day except Sunday," his desire to return to his family in New Hampshire being "uncontrollable by his friends...got wet feet and a chill." He soon developed a fever, but by mid-November he was "feeling better in every respect...walking about the house again; says he feels no pain in the head." Harlow's prognosis at this point: Gage "appears to be in a way of recovering, if he can be controlled."

On September 13, 1848 Gage was a 25 year old foreman of a blasting crew preparing a railroad bed outside Cavendish, Vermont. He used his 3 foot 7 inches, 13 1/4 pound iron rod to tamp gunpowder and sand into a hole in the rock. On this day something went horribly wrong. The rod striking the stone caused a spark and the resulting explosion sent the rod flying up and through his left cheek and out the top of his head. To the amazement of everyone he was not killed and lived for more than eleven years.

As Phineas P. Gage, a foreman on the railroad at Cavendish, was yesterday engaged in [tamping] for a blast, the powder exploded, carrying an iron instrument through his head an inch and a fourth in circumference and three feet and eight inches in length, which he was using at the time. the iron entered on the side of his face, shattering the upper jaw, and passing back of the left eye, and out the top of the head.

The most singular circumstance connected with this melancholy affair is, that he was alive at two o'clock this afternoon, and in full possession of his reason, and free from pain. 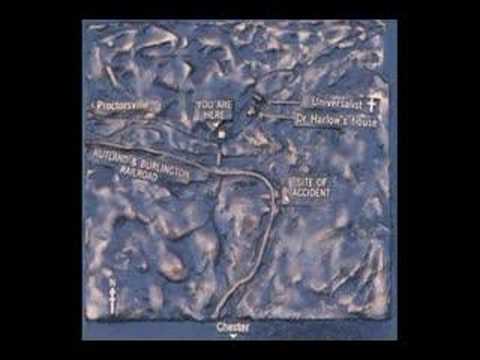