The historic building stands on a hill south of the east fork of the Chagrin River, about three miles southeast of Willoughby, Ohio, and about nine miles southwest of Painesville, about six in direct line from Lake Erie.

It is visited by many tourists every year.

The building is of stone, plastered outside and in, and is three stories high, exclusive of basement. The first and second floors are auditoriums and very much alike, each fifty-five by sixty-five feet on the inside, exclusive of the vestibule on the east end, through which is the entrance to the building and in which are the stairways. The lower room was to be dedicated for "sacrament offering, and for your preaching; and your fasting, and your praying, and the offering up your most holy desires unto me, saith your Lord." The second room was to be used for the school of the apostles. There are eight pulpits in each of these two rooms, four in each end. Those in the west end are for the use of the Melchisedec priesthood and those in the east for the Aaronic. The third story is divided into small rooms, intended as class rooms, as the Saints, especially the priesthood, were engaged almost continually in some kind of schoolwork.

March 27: One thousand worshippers begin a week of temple dedication ceremonies in Kirtland. Witnesses report rushing winds, a pillar of fire, and the presence of angels. During the dedication, a critical visionary experience occurs in which the prophet and Oliver Cowdery, who have retired behind a veil that separates an elevated pulpit from the rest of the temple, see a personage they believe is Jesus, accepting the temple as a place where he will manifest himself to his people. In addition, they see the Old Testament prophets Moses, Elijah, and Elias, who commit into LDS hands the keys of the gathering of Israel and the new dispensation of the fullness of times. 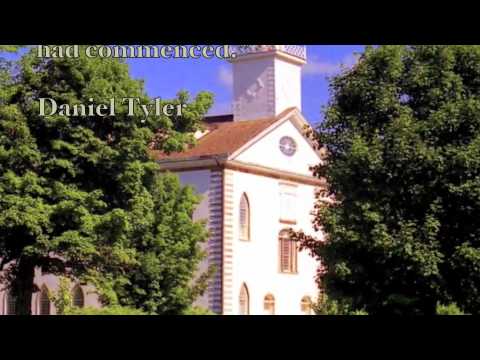