John A Roebling is born

On June 12, 1806, John A. Roebling, civil engineer and designer of the Brooklyn Bridge, was born in Muehlhausen, Prussia.

The Brooklyn Bridge, Roebling's greatest achievement, spans the East River to connect Manhattan with Brooklyn. For nearly a decade after its completion, the bridge, with a main span of 1595 feet, was the longest suspension bridge in the world. Steel wire cable, invented and manufactured by Roebling, made the structure possible.

In 1869, Roebling died from tetanus he had contracted in an accident on the bridge pilings. From 1870 on, Roebling's son and partner, Washington A. Roebling, supervised construction. A series of mishaps, including an explosion, fire, and contractor fraud hampered completion of the project.

Pneumatic caissons sunk to a depth of forty-four feet on the Brooklyn side, and seventy-eight feet on the Manhattan side provided dry space for workers to dig footings for the bridge's foundation. Alas, working in the caisson often brought on "the bends" -- a serious medical condition caused by moving too quickly from a high-pressure atmosphere to a low-pressure atmosphere. Washington Roebling was among many workers permanently impaired by the then little understood "caisson disease."

The Brooklyn Bridge opened to citywide celebration on May 24, 1883. Over the next hundred years the bridge became part of the romance of New York City. Poets and artists have long found the bridge a worthy subject. The Brooklyn Bridge continues to serve as the backdrop in countless photographs and films. It plays roles both real and fanciful in the American memory.

When the Brooklyn Bridge was opened you had to pay three cents to cross it until it was paid for. When they opened the bridge everybody went to see it..It took them 14 years to build the Brooklyn bridge.”

On the other side are the long pierhouses and the ships and Brooklyn Bridge is to be seen from any part of South Street and no fooling it is really "of harp and anvil fused," as [the poet Hart] Crane said.” 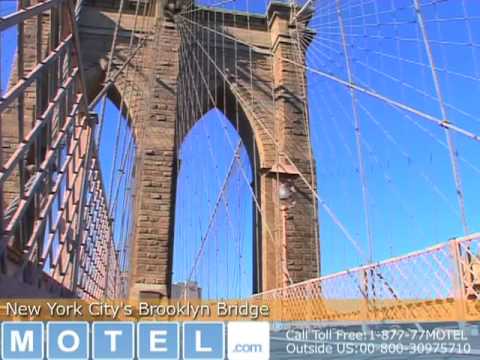