So began the infamous Salem Witch Trials of 1692. Over the following months, more than 150 men and women in and around Salem were jailed on charges of exercising "Certaine Detestable Arts called Witchcrafts & Sorceryes." Nineteen people, including five men, were eventually convicted and hanged on Gallows Hill; and an additional male suspect was pressed to death. Others died in prison. Today they are seen as victims of a tragic mistake.

Cousins Abigail Williams and Elizabeth Parris, ages eleven and nine, respectively, began to enter trance-like states and to suffer from convulsive seizures in January 1692. By late February, prayer, fasting, and medical treatment had failed to relieve their symptoms, or to quiet the blasphemous shouting that accompanied their fits. Pressured to explain, the girls accused the three above-named women of afflicting them.

A recent epidemic of small pox, heightened threats of Indian attack, economic uncertainties, and small town rivalries may have all primed the people of Salem and its surrounding areas for the mass hysteria that fueled the witchcraft trials. Although social status and gender offered little protection from accusations, historians note that single women particularly were vulnerable to charges of practicing witchcraft, while pre-adolescent girls were likewise most vulnerable to affliction. Sarah Good, Sarah Osborne, and Tituba, for example, all lacked male protectors, while three of the signatories to the bail petition pictured above are widows.

From June through September of 1692, nineteen men and women, all having been convicted of witchcraft, were carted to Gallows Hill, a barren slope near Salem Village, for hanging. Another man of over eighty years was pressed to death under heavy stones for refusing to submit to a trial on witchcraft charges. Hundreds of others faced accusations of witchcraft; dozens languished in jail for months without trials until the hysteria that swept through Puritan Massachusetts subsided.

The Salem witch trials were a series of hearings before local magistrates followed by county court of trials to prosecute people accused of witchcraft in Essex, Suffolk, and Middlesex counties of colonial Massachusetts, between February 1692 and May 1693. The episode has been used in political rhetoric and popular literature as a vivid cautionary tale about the dangers of religious extremism, false accusations, lapses in due process, and governmental intrusion on individual liberties.

Despite being generally known as the "Salem" witch trials, the preliminary hearings in 1692 were conducted in a variety of towns across the province: Salem Village, Ipswich, Andover and Salem Town. The best-known trials were conducted by the Court of Oyer and Terminer in 1692 in Salem Town. Over 150 people were arrested and imprisoned, with even more accused but not formally pursued by the authorities. At least five more of the accused died in prison. All twenty-six who went to trial before this court were convicted. The four sessions of the Superior Court of Judicature in 1693, held in Salem Village, but also in Ipswich, Boston and Charlestown, produced only three convictions in the thirty-one witchcraft trials it conducted. The two courts convicted twenty-nine people of the capital felony of witchcraft. Nineteen of the accused, fourteen women and five men, were hanged. One man (Giles Corey) who refused to enter a plea was crushed to death under heavy stones in an attempt to force him to do so. 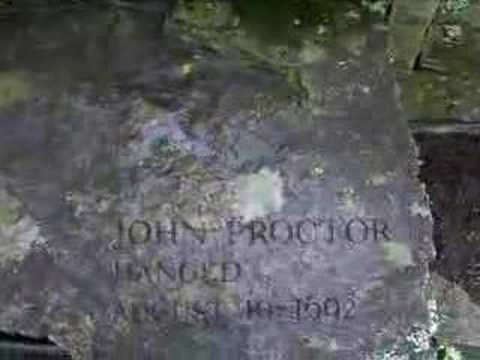