Leonardo da Vinci Sketches the Design for the "Aerial Screw"

The first studies on helicopters were well in advance of the first airplanes.

Leonardo da Vinci is credited with having first thought of a machine for vertical flight, the "airscrew," the design for which, dated 1493, was only discovered in the 19th century. It consisted of a platform surmounted by a helical screw driven by a somewhat rudimentary system, not unlike that of rubber-powered model aircraft. The great Tuscan genius wrote that if this instrument in the form of a screw were well made of linen, the pores of which had been stopped with starch, it should, upon being turned sharply, rise into the air in a spiral. However his design was never put to any practical use.

An object offers as much resistance to the air as the air does to the object. You may see that the beating of its wings against the air supports a heavy eagle in the highest and rarest atmosphere, close to the sphere of elemental fire. Again you may see the air in motion over the sea, fill the swelling sails and drive heavily laden ships. From these instances, and the reasons given, a man with wings large enough and duly connected might learn to overcome the resistance of the air, and by conquering it, succeed in subjugating it and rising above it.” 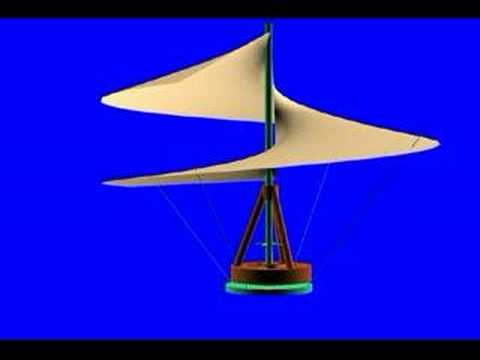 View other events that happened in 1493