Donatello was apparently inactive during the last three years at Padua, the work for the San Antonio altar unpaid for and the Gattamelata monument not placed until 1453.

He had dismissed the large force of sculptors and stone masons used on these projects. Offers of other commissions reached him from Mantua, Modena, Ferrara, and even perhaps from Naples, but nothing came of them. Clearly, Donatello was passing through a crisis that prevented him from working. He was later quoted as saying that he almost died "among those frogs in Padua." In 1456 the Florentine physician Giovanni Chellini noted in his account book that he had successfully treated the master for a protracted illness. Donatello completed only two works between 1450 and 1455: the wooden statue St John the Baptist in Santa Maria Gloriosa dei Frari, Venice, shortly before his return to Florence; and an even more extraordinary figure of Mary Magdalen in the Florentine baptistery. Both works show new insight into psychological reality; Donatello's formerly powerful bodies have become withered and spidery, overwhelmed, as it were, by emotional tensions within. When the Magdalen was damaged in the 1966 flood at Florence, restoration work revealed the original painted surface, including realistic flesh tones and golden highlights throughout the saint's hair. 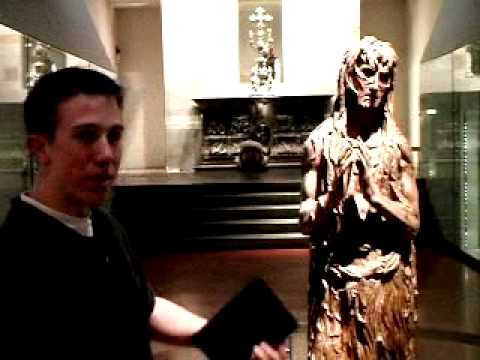 View other events that happened in 1455